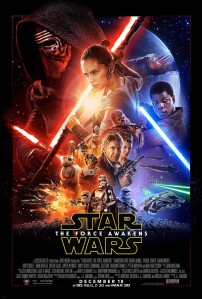 Okay, I can get behind a few product tie-ins for Star Wars: The Force Awakens, but others are both annoying and baffling once you take off the fan blinders. The obvious ton-plus of licensed toys based directly on the film and that Sphero BB-8 app-enabled robot that have been flying off store shelves? Yeah, those are givens any fan should run someone over with a landspeeder to get. I’ll even give it up for the assorted Star Wars food products from cereal to fruit snacks and beverages to the somewhat expensive Ample Hills Ice Cream I’ve yet to try because I can’t justify paying $36 for four pints and waiting almost a month to pick up or have delivered due to high demand.

Yeah, yeah. I’m not some major news network or big site, so I know I won’t get a shipment of free ice cream to try out like a bunch of local outlets have, so I’ll have to use my imagination (and the Force!) to get an idea of how well all those ingredients come together. Wait, what was I talking about? Ice cream thoughts lead way down the rabbit hole of distraction… oh, right.

The annoying and baffling stuff comes from the dopey “we want your Star Wars money even though our products aren’t even vaguely related to the film” products such as makeup, clothing (not really) “inspired by” the movie and worst of all (or best, if you’re a total car nut), cars and trucks that would be very out of place in a galaxy far, far away:

Hmmm. Let me think for a minute. Oh right. The last time I saw a displaced Dodge in a film it was ill-fitting in was this one:

Yipes. Well, I guess it’s good PR for Dodge to be so hip and trendy with a team that clearly jumps on opportunities to get their brand out and about in as many creative ways as possible. It’s also true that I’ve not yet seen the film and don’t even know if Dodge stuck or snuck a Dodge (or Jeep or Chrysler) into the movie hidden waaaaay in the background of some big CGI scene (hey, it’s possible some fan will find a logo or something at some point on the inevitable Blu-Ray release). But other than getting some auto-heads wanting to snap up that Vader-inspired Viper, it’s tricky to see what the point is of this tie-in. Any true Star Wars fan (well, the light side ones) will tell you that an Imperial Stormtrooper-themed car would handle about as good as those white-clad goons shoot in the movies and nope, you’d not want to be behind the wheel when one of those rides takes a curve any way it decided to.

Hmm… perhaps “Force Dodge” is a new Jedi skill? One would hope so.