D3Publisher of America brought along bullet hell, beast hell and bug hell to their recent NYC press event and fans of insanely deep dungeon crawlers, trippy arcade shooters and giant bug blasting will all be well-served soon enough with a few key releases. I'm working on a separate hands-on for Dream Trigger, Bangai-o and Gods Eater Burst – from this point onward… this article is all about Earth Defense Force Insect Armageddon and how much it simply rocks. 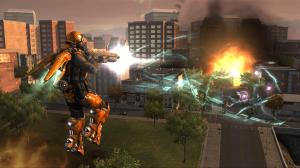 I've been waiting patiently for D3Publisher of America to drop into NYC with a build of Earth Defense Force Insect Armageddon and after playing a bit of the very solid, very fun three-player online co-op and a bit of the intense Survival Mode, I can very safely say that the game's going to be a keeper for EDF fans old and new. The missions are lengthy and challenging even on the easiest setting with bugs appearing in differently sized packs that come from multiple directions, often mixing in different types of pests that end up being more than enough to keep you on your toes. I'm getting ahead of myself here, so I'll break it down from the beginning. Read more »