As “making of” documentaries go, RAIDERS! The Story of the Greatest Fan Film Ever Made is pretty darn great. However, as a friend I watched this Blu-Ray with noted, “It’s kind of missing something important…” to which I had to ask (as I was thinking the same thing) exactly what he thought that was. The answer was of course, the actual fan film itself.

Yes, you get snips, clips and blips of the film with deleted scenes here and there, plus more as bonus features (which are all excellent). But as fine as all that is, not seeing the end result of 7+ years of work ends up making for a tremendous tease more than anything else. Granted, I knew there were some good (legal) reasons why it’s not on the disc. Then some smart poking around led me to this official website where yes, you can actually buy a DVD or digital download of the film as well as some other cool merchandise that includes actual props from the seven years in the making fan flick.

Damn. There went my joke about the real reason being Steven Spielberg becoming sick and tired of hipsters saying “Oh, that’s the film Raiders! was based on!” (which, yes…*sigh*… I actually overheard coming from someone’s mouth not too long ago. Damn hipsters!).

For the uninitiated, In a nutshell: back in 1982, teenagers Chris Strompolos, Eric Zala, and Jayson Lamb decide to make a shot-for-shot remake of Raiders of the Lost Ark, which took seven summers to complete, save for one particularly effects-heavy sequence the documentary shows being planned and newly shot as the film progresses. Actually, it shows the problematic shooting of that sequence, from overbuilding a key prop, weather being a key reason green screen is a thing, and that at end end of the day, making your dreams come true isn’t at all magical.

The doc also reveals the trio haven’t always been tight as a drum with the whole friendship thing thanks to the usual human foibles we all have. That the film even got made through thick and thin, accidents, and a bit of stupid behavior is pretty remarkable. That the came back for one last scene is even more so, especially as it ends up being, well… a perfect Hollywood moment you couldn’t script any better than what’s here. 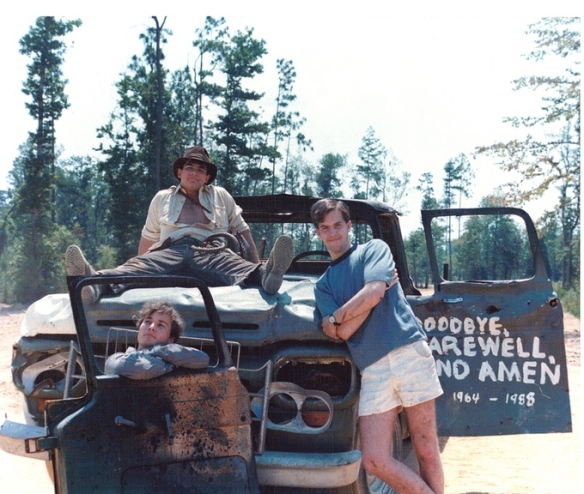 Everything zips along at a merry pace, info dropping fast, but always digestible. The spouses here are incredible, putting up with their men an this obsession, but it’s not a rare thing at all that wives accept their hubby’s hobbies. Just like the myth that girl gamers are hard to find (oh, please – I can toss a plush Tribble at a comic convention and hit ten of them before some stinky guy’s funk shield makes it explode into fuzzy dust), ladies with that lovably dorky side are legion.

Anyway, as documentaries go, this one’s great as well as a keeper, I say. If you haven’t seen the fan film yet, well… you know where to look. If you’re introducing yourself or someone else to this, yeah… make sure to see the source material first, please. Just so if you happen to run across Mr. Spielberg, you get the thanking order as it’s supposed to be.