I can recall the first time I played General Chaos on the Sega Genesis and not liking it because it was so different than the strategy games I was used to playing. Of course, that wacky art style and hilarious action-packed gamplay changed my mind quickly, as it took maybe a half hour of play before I was hooked, so I’ve been a big fan ever since. While I’m not sure of how many units it sold, I do know that the game has garnered a particularly loyal fan base then that’s been hoping for a sequel or remake for over 20 years. Well, thanks to Brian Colin and Game Refuge (the same folks behind the original), General Chaos II: Sons of Chaos is now a Kickstarter project you should look into funding. It’s a LOT cheaper than a real war and hell, you’ll both get some laughs to boot. 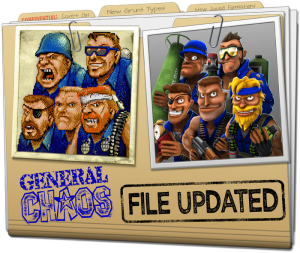 I’m liking the upgraded art style here quite a lot and it looks as if that trademark humor is intact. The only thing I can say I’d like to see more of is destructible environments, as who wouldn’t want to take out that guy in the wooden watchtower by taking the tower down with him? Yeah, I thought so. Anyway, the funding on this has 25 days to go and is still pretty low considering the goal is a mere $125,000. I guess more people need to study up on their game history. Hmmm… maybe the team at Game Refuge can do something about that like get the original game out on different platforms at some point down the road (with improved controls, of course). That old classic would make a fine game on PSN, Nintendo’s eShop and XBLA that’s for sure and I’m certain an iOS and Android version could be done. On the other hand, I want them to get the funding for this sequel taken care of so we CAN see the original get done up for today’s systems. So, give ’til it hurts (it won’t hurt for long) and prepare for battle as only a General Chaos game can deliver!