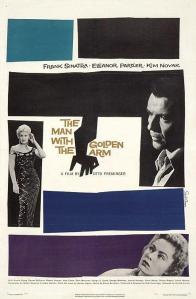 Sure, drug addiction isn’t a laughing matter at all, but Otto Preminger’s 1955 classic The Man With the Golden Arm manages to be more hilarious each time I see it for a few reasons. Although it’s packing in a classic Elmer Bernstein score, a great Saul Bass title sequence, Preminger’s strong direction, some powerful performances from Frank (One Take) Sinatra, Kim Novak, and a bunch of very familiar faces, the simple fact is the film hasn’t aged well at all (but that’s a good thing).

What may have been seen as a deathly serious subject for a cautionary tale almost 60 years ago can now be enjoyed as a nearly non-stop riot of scenery chewing performance art with two of the funniest demises in a “serious” film. Granted, if you’re in a totally unfunny mood, the film still has its story and dramatic pacing to keep you hooked in. On the other hand, it’s hard not to get in a laugh at the film’s expense in a few spots…

Sinatra (who was nominated for an Academy Award here) plays Frankie Machine, a newly clean “former” heroin addict recently released from prison after a few months detention. While in the joint, Frankie learned to play the drums and now considers himself good enough to get a gig as a professional. Of course, you can see the telegraph poles all over this one, as Frankie’s dreams are soon squashed thanks to nearly everyone in the old run-down neighborhood he comes back to. Somehow, Machine is also a slick card dealer, so Schwiefka (Robert Strauss), the creep who runs the illegal poker matches wants him to deal while Frankie’s old drug dealer, Louie (Darren McGavin) wants to welcome his favorite old customer back with a fresh monkey for his back.

Surprisingly, Frankie’s wife Zosh (Eleanor Parker) is worse than the two men. She’s wheelchair-bound as a result of a car crash she and Frankie were in, but she’s long since healed and is faking being crippled in order to keep her hubby on a very short leash. Parker plays Zosh as needy and whiny yet mean-spirited and aggressively determined that Frankie do nothing with his new life except stay at her side even if it means he’s back doing heroin and curled up in a ball in the corner of their run down flat.

Thankfully, there’s Molly (Kim Novak), a cocktail waitress/cigarette girl who works at the local sort er, “gentleman’s club” to lighten Frankie’s load from his outside stresses. Of course, all doesn’t go well when Frankie ends up back on the needle, flops out at his big chance to go legit and is forced to deal (while strung out, yet!) in a huge card game that lasts one hand too long. There’s more, including a wild withdrawal sequence made crazier thanks to Bernstein’s score echoing Frankie’s cold turkey-ing out and those two amusing deaths I noted above.

Yes, I know, it’s a SERIOUS dramatic piece that considered a classic, but the film is funny to me because of the casting of some roles and the acting all around. Arnold Stang is clearly in the wrong film with his lost dog colored with shoe polish scam (and getting slapped around by a hood at one point in yet another unintentionally funny scene), Darren McGavin plays Louie more like a well-dressed pimp with a ratty apartment of his own, heroin stashed in his shoe and a big-ass ring (that he twists around at one point like he’s in an old Burger King commercial about to zap himself into the future), and Parker’s Zosh turns into a wild-eyed caricature of herself when her secret is revealed late in the film.

A few years back when I recommended this flick to a friend who’d never seen it before, he told me the next day that his wife took to calling Zosh “a real piece of work” or “what a crazy bitch!” as the film progressed. You KNOW a performance works when you get one woman knocking another in such a manner. Frankie’s big tryout is also a howler, as the filmmakers decided to use an actual jazz band complete with a bandleader (I think it’s Shorty Rogers) who’s clearly not an actor. His nasally delivery is a huge key to enjoying the scene in ways it’s not meant to be enjoyed, so keep an ear peeled.

As to those deaths, both come by falling and the first one is worth paying close attention to because of the way the “body” falls and the sound effect used on the way down that’s like a nose-diving cartoon rocket followed by a muted thump. You’ll make that same sound falling off your seat laughing, I’ll bet. The second death is funny because it’s sudden, needless and basically wraps up the film in a weird “boy meets girl, boy loses girl, boy gets another girl” manner. All in all, it’s a classic drama that stretches across genres into comedy gold and even better, it’s in the public domain these days so it’s a total freebie.

Amusingly enough, the film is also part of video game history, as developer Starbreeze Studios figured out how to fit it, To Kill a Mockingbird and a few other films and TV shows into their not quite for kids at all game The Darkness as programs you could sit down and watch anywhere you found a working television in the game world. So, yeah – you kind of have no excuse not to catch this one at some point. Just don’t blame me if you get hooked…

1 thought on “Random Film of the Week: The Man With the Golden Arm”