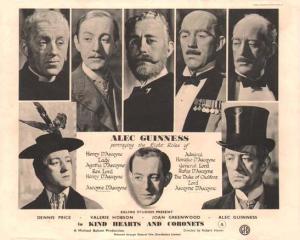 Did Ealing Studios ever make a bad comedy? I’ve yet to see one, and the streak they were on brought some of the most memorable flicks to lucky audiences that are still great today. One of the best black comedies ever made and featuring Alec Guinness in an amazing eight roles, 1949’s Kind Hearts and Coronets is a truly classic film that’s still as effectively dryly hilarious and fun to watch as ever. If anyone tells you that movies with voice overs that spell things out are “bad” films, sit them down with this one and watch them choke on that thought as they die laughing.

The film manages to be great despite that running narration by its murderous lead character Louis Mazzini, the tenth Duke of Chalfont (Dennis Price) as he retells his family history and lays out how he’s dispatched the assorted surviving members of a wealthy family in a quest for revenge, a title and the affections of two ladies who drop in and out of his life. Granted, you’ll feel a lot more for Mazzini than you do for his victims in the D’Ascoyne family, most of whom seem somewhat deserving of their assorted fates…

Mazzini’s early history makes you feel for the poor guy, as his poor mother and he suffer disgrace and are disowned by her husband’s family with the final straw coming after his mother passes away and is refused burial in the D’Ascoyne family crypt. Price’s dry tone and director Robert Hamer’s flawlessly meticulous direction fit perfectly together as the director drops humor into moments other films would mine for big hanky moments. Even as Mazzini’s mother dies there’s a laugh in the scene, although the tone has already been set from the start (if you see the original British cut and the US one, you’ll note a few important dialog and plot changes). As Price waits out his chance for revenge (some of the D’Ascoyne line die off without his “assistance”), he dallies on a regular basis with Sibella (an excellent Joan Greenwood), a childhood friend who initially spurned his marriage proposal but now that she’s hitched, keeps dropping in because her husband bores her.

Soon, the remaining eight D’Ascoyne’s start dropping like flies, one with his mistress go in a drowning, there are two bomb deaths, a poisoning, a balloon shot down by an arrow over a public square, a shooting and more. Despite the grim business taking place, the film is constantly funny and surprising because at no point does Mazzini make himself out to be an unlikable monster and more often than not, you’ll be wanting him to succeed. It’s a much less mean-spirited Monsieur Verdoux (a great flick to pair this one up with if you’re in a proper mood), but amusingly enough, both films’ killers ask you to forgive them for their deeds at some point before the credits roll. As for Guinness, he’s amazing here, but in that magnificently understated way he played characters throughout his long career. Here, he plays D’Ascoynes young to old and even a woman (in a great sequence) and is completely believable as each of the doomed clan.

It’s when he meets the lovely (and more respectable than Sibella) Edith (Valerie Hobson), wife of one of the D’Ascoynes he kills with an explosive, that things start to go downhill. You just know that Sibella and Edith will eventually cross paths (and they do) and the film will dryly show Mazzini doing his best to juggle the two while justifying his devious behavior. Of course, given the film begins at its ending, you also know he’s not going to exactly get away with murder… or will he? Of course, even when he’s handed an easy out, the man manages to royally muck that up in the drollest manner possible. You’ll more likely than not see it coming before he does (if you’re paying attention), but don’t let him know that, I say…

1 thought on “Random Film of the Week: Kind Hearts and Coronets”