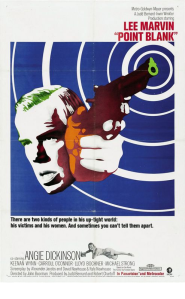 Forget that offbeat poster to the left, all the film’s stylish narrative tricks and fine ensemble cast doing some stellar work, folks. There’s one obvious moral to John Boorman’s Point Blank that seems to have escaped nearly everyone who dies in this film. That would be the following: If you owe Walker $93,000, stop talking so damn much, pay the man and stay breathing a bit longer.

Of course, this would make for a really short movie that’s probably not too entertaining, so the assorted bad men yak it up with excuses for not having his money while Walker (Lee Marvin), beats them with his wits, fists, a few well-placed bullets and assorted items in some of the sets. This is one of those “mature” late 60’s flicks where violence and refreshing vulgarity were emphasized as selling points and served the story being told. Although the storytelling here may require repeat viewing for those not used to narrative abstractions such as unusual editing, flashbacks and an ending that leaves a few questions lingering in the night air like the smell of gunpowder.

Of course, Walker is clearly no saint himself. He’s a bad man that gets betrayed, shot and left to die during the drop off of some stolen money (at a shuttered Alcatraz, of all places and by John Vernon of all people!). To add insult to serious injury, Reese, the cad that blasts Walker (and does a very lousy job of making sure he’s actually dead), “steals” Walker’s wife as well as the money, which would be the ending to a standard heist film under normal circumstances. The End. Roll Credits. But nope, Walker somehow survives and wouldn’t you know it, two years later, he meets a really interesting man named Yost. Interesting, because his name is Yost and because it’s Keenan Wynn (the second of a few casting surprises) playing Yost.

Yost is really a font of information, spilling a few beans about who’s who and pointing Walker’s strings in a few directions he’s more than happy to head off to. Well make that determined, as seeing Marvin smile at all in this film like a normal person often does is blue moon stuff of dreams. He just wants his 93 grand, period. After a sudden death ( which isn’t really Walker’s doing… sort of) and a detour to test drive a nice car just to scare the dealer who knows a few names into coughing them up. Walker ends up meeting his wife’s sister, Chris (Angie Dickinson, in full late 60’s bloom) who has even more info for him. Like a twisted jigsaw puzzle falling into place, that info leads back to Reese, who dies a nasty (but strangely hilarious) death (and nope, Walker still hasn’t gotten a dime).

A new lead leads to a hit on him that goes south and there’s more death (slightly less amusing, but still…) and then it’s off see Brewster (Carrol O’Connor!) and a request for a withdrawal. Of course, Brewster’s not home, so Walker and Chris have a romantic night alone (well, they fight and have sex) only to find out the next day that Brewster hasn’t got millions (or even 93 big ones) lying around when he arrives.  A trip back to where it all began ends the film with a death, more questions and a disappearance and if you find yourself more than a little confused by the swirling miasma (in the Greek sense) of sensory overload you’ve just experienced, you’re not alone.

Is Point Blank, as some suggest, Walker’s dying moments spooled out in his head as his blood drains into Alcatraz’ filthy gutters over the course of its running time? I’ve never thought so, but the film keeps dropping those odd flashbacks or uses bold color choices and striking set pieces to suggest a near-dreamlike state to Walker’s single-mindedness as he dead-sets his way around some stunning and sometimes sparse locations. The violence Walker perpetrates is always sudden and somewhat shocking, but completely expected of the character. Hell, I bet you’d make a man jump off a balcony if he could get you that 93 large.

The casting is perfect, although it’s really amusing to watch this one with folks who only know Wynn, Vernon and O’Connor from their comedic work. Once you threaten them with some of your own violence to shut it and enjoy the film, they’ll be all in and glued to the screen. The ladies are suitably sexy yet damaged goods in that  eyebrow raising way Hollywood did frequently during this period. As for that still striking title sequence, like other mature-rated classics of the era, Bullitt, and The Wild Bunch, you get an opening that’s unforgettable and sets the tone for what to follow. Yeah, that’s right – you get to lock the kids in the closet again – toss the dog or cat in as well so they’ve got some company for that brisk 92 minutes…

1 thought on “Random Film of the Week (Too): Point Blank”