Due to my dopey old laptop giving up the ghost around the time last month’s Retro Pop Box arrived and me running about doing the headless chicken thing for a bit, I’m just getting around to posting the goodies in that box now. Amusingly enough, this month’s box popped up in the mail as I was getting ready to write this post, so you get two (*smooch!*), TWO mints in one! Or something like that. Anyway, November’s RPG looked like this once opened:

And inside were the following 70’s themed items:

The RPB exclusive T-shirt made me grin and yes, it’s gotten some comments thanks to that funky retro design. That Silly String (which I’m saving for the proper occasion) came with a card detailing the product’s creation and rather cool usefulness as a means for soldiers to locate booby trap tripwires in war zones (and making me wonder how much the military is paying per can or if the stuff has to be shipped out by families who want their loved ones coming home safe). That Evel Knievel First Aid Kit made me laugh out loud because while it’s not vintage, I immediately imagined the stunt king of the 70’s packing one of these in every pocket of his star-spangled jumpsuit with a spare inside his helmet each time he made one of those death-defying jumps on ABC back in the day.

I hadn’t seen a Mood Ring in some years, so having one handy is quite nice (Current mood: Happy!). I’ll need to wear that CULT LEADER button with the Retro Pop Box logo one day when I’m out and about just so when someone asks about one, I can tie in the other without worrying about them getting the wrong idea. Yes, I’d say my cult is RPB and they NEED TO JOIN. NOW. (without an “or else!” on the end of that demand. We’re a nice bunch of nostalgia-heads. As for that Brady Bunch lanyard, my brain is flicking through its Rolodex to see if I recall anyone named Marcia because this would be a groovy gift for her. Hey, better a colorful lanyard than a football to the nose, right? Yeah, I thought so.

As for December’s RPB, read on for more on that one… 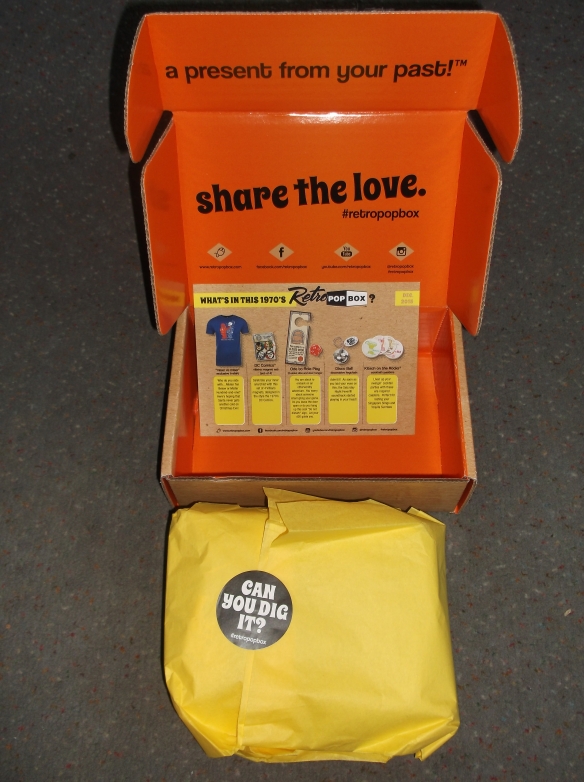 This month’s T-shirt (below) made for some fun conversation with some guy pushing a stroller who cracked up when he saw me walking down the street towards him. I had to twist his arm to poke around on the RPB site because he’s already done his Xmas shopping for the year and was suffering from a case of lightness of wallet. Hey, having just shelled out for a new laptop and other necessities myself, I felt his pain. But at least he promised to check out RPB once January rolled around. I also had to explain to someone else that 1974’s classic family special The Year Without a Santa Claus did NOT have fighting robots in it at all. But it does have two classic holiday songs you all should know (everyone sing!):

The other goodies were awesome, as usual: 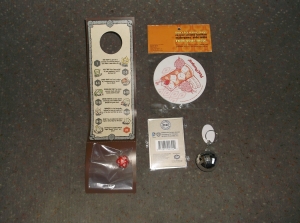 That two-sided Dungeons & Dragons-inspired Do Not Disturb sign is in use, although if you were here, you’d be rolling that D20 die in another room (and if you have to walk back from a closed room to roll a die, that’s an automatic KEEP OUT right there). The coaster set, DC Comics villain magnets and disco ball are going to a friend who’s a big comics nut who happens to make some decent adult beverages. He dislikes disco, so the ball will be a nice gag gift. Of course, he’ll hang it in his car where he tends to put a few oddball items people give him or perhaps pass it to his wife who DOES like disco. Hey, I don’t mind if you re-gift anything I give you as long as someone’s smiling at the end of the day. In any event, if you’re looking to surprise that special someone with some neat nostalgia from the 60’s, 70’s or 80’s every month or even for a few months, Retro Pop Box is waiting for you to pop by for a visit.