Back around 1990 or 1991, I recall my younger brother and I getting hopelessly stuck in Phantasy Star and in dire need of assistance. Nope, we weren’t mapping the dungeons at all, so some areas of the game were total nightmares. Still, we slogged through the game , managing to make it all the way to the infamous Baya Malay dungeons where we finally threw in the towel. Almost. Out of sheer frustration, I said, “Eh, go write Sega!” and a few days later, we’d worked out a letter asking for help and sent it off hoping for a response. About two weeks later, an envelope arrived with that familiar logo and we were both thrilled to open it up and find a photocopied walk-through of the game that helped out quite a lot.

Amusingly enough, in the interim, we’d managed to level everyone up so they were all pretty much invincible. When it came time for Myau to “flap(s) his wings ploudly” (heh) and take off for that Sky Castle, that big ol’ mandatory bird boss battle was over in something like three hits. On the first turn, yet.  The final boss was a breeze as well, but were were even more impressed by the end credits of the game, which showed off the pseudo 3D scaling in a really cool way.  To date, the game is still a truly great example of a few things including full screen “corridor” style movement that even developers making games for more powerful 16-bit systems from Sega and Nintendo failed to get running as smoothly or as fast (or even full screen, for that matter). 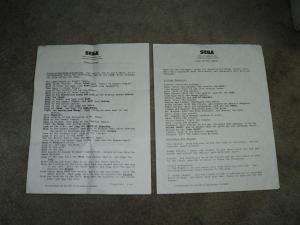 Anyway, during the wait time between when we mailed the letter and when it arrived, a few other games ended up stumping us for a bit. However, once that PS walk-through arrived, another note went out asking about Lord of the Sword, Spellcaster and Golvellius: Valley of Doom. I think we got two of those in one envelope and a third in a separate mailing, but by then, we were on a roll with the letter writing. I even wrote Nintendo about a NES I’d found that needed service and got a really speedy reply with a few local spots that happened to be authorized Nintendo service centers. I ended up not having to spend a dime on repairs, as a friend managed to get that system up and running with about five or so minutes of tinkering.  More money for games is always a good thing, I say…

I recall not being able to find certain Master System titles because Genesis games were taking that shelf space in pretty much every retailer. Off went a note asking about mail order titles (Sega did some mail order back then), in the mail came a list of stores in my area that still stocked some SMS games. Soon after that, I was sent a free issue and later subscribed to Sega Visions, the company’s in-house magazine devoted to all things Sega. They had a fan art section, so I sent off a few inspired pieces (one of which I posted yesterday), two of which were published in the magazine. I’d also started sending letters of comment and the occasional piece of envelope art to other magazines I was getting and had a handful more pieces of art published. 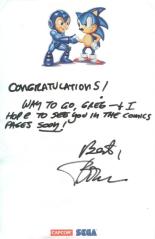 In addition to Sega Visions, I think I ended up with art printed in two issues of Electronic Gaming Monthly and at least one issue of Die Hard Game Fan (where I actually won their Haunting comic panel contest – I still have that airbrushed Polterguy leather jacket hanging in a closet here). One other piece of art sent to EGM’s The Game Doctor (or the late Bill Kunkel) didn’t win first prize in a contest he was running, but was still published and netted me a nice note and a small package of miscellaneous swag including the signed Capcom/Sega notepad page to the left. As for Sega, I still wrote them every so often, but things were definitely changing quite a lot in their customer service department.

Letters that were formerly a lot less formulaic and hand-signed now had printed signatures and started to hype subscriptions to Sega Visions as an automatic response to the simplest query. Or worse, in a few cases not quite answer the questions I’d asked regarding the potential of localizing certain Mega Drive imports. Still, that didn’t stop one of my request letters from getting me a non-disclosure form to fill out and send back (which was weird, as I wasn’t suggesting any NEW ideas at all – I just sent a list of Japanese games I’d love to have seen in the states). I think I finally stopped writing in late 1994 or early 1995. I was getting busy with work and really expanding my gaming horizons to other platforms and Sega was busy dealing with the transition from 16 to 32-bit, making a few bumpy treks into half-baked add-ons such as the 32X, which failed because of a few reasons not including a bit of unclear focus as to what the peripheral was supposed to do. 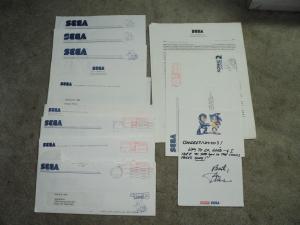 Additionally, I was thinking about writing about games for a while, so I started making the move into putting out a self-published fanzine similar to the ones a few friends were doing. So, with the exception of two of the walk-throughs  which were given away when I sold off some SMS games in the late 90’s (oops!), I kept the Sega correspondence in a folder that’s been moved around more times than I can count. I’d initially planned to whip them out for the 4th issue of my now-dead fanzine, Continue?, but I’d gotten wrapped up in writing for an actual game magazine that was a bit of a hell job, but quite an interesting learning process. That’s another tale for another time, but hey, I have to keep SOME suspense going, right?