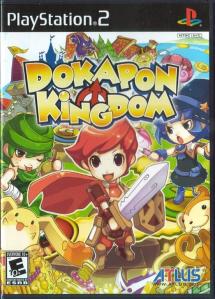 I have a stupidly long list of article idea and as usual, not enough time to get them all written, but every so often I’m going to post the occasional test article for your perusal. Here’s one goofy idea I had ages ago while writing for another site about games that made for a terrible time when played alone. I thought about reviving the idea recently while listening to some folks in a game shop arguing about what was the worst game to play alone and getting a chuckle that every game mentioned in their discussion revolved around survival horror, MMORPGs or assorted shooters (with every game mentioned in the latter two genres geared for multiplayer gaming). The first game I thought of was Atlus’ 2008 US release of Sting’s 2007 hybrid board game/RPG, which some have very incorrectly labeled a straight Mario Party clone. The Dokapon series was around a bit longer than Mario Party and Dokapon Kingdom is more or less a polygon-based reworking of a Super Famicom game from 1994 called Dokapon 3-2-1: Arashi o Yobu Yuujou, which is equally challenging as a solo play experience. Now, neither are anything resembling “bad” games at all. They’re fun to play and funny, but are both just designed to work better with more than one person playing them…

What makes the game enjoyable (even if you decide to brave it in solo play) are the wacky humor and sheer amount of things to do as you make your way around the nicely sized board that represents the kingdom you’re trying to win (along with the hand of the King’s daughter). You’ll battle it out with other AI players, do a bit of city building, play all sorts of mini-games and earn a ton of money (which in this game is the main goal). What makes the game incredibly, terribly and mind-bakingly annoying is the AI in single player. It’s not that the game “cheats” at all, folks – it’s that it plays just like a real person who’s too good at this particular game would. Playing Dokapon Kingdom alone against the AI is like going to Vegas and sitting down at a high stakes Poker table with the best of the best and complaining that you keep losing. Or playing novice Chess against a grandmaster and getting frustrated that he’s cleaning your clock before your brain has time to learn what to do.

You’ll gain a city or two in your quest, only to see them invaded and lost once you’re too far away to defend them. Huge amounts of money you’ve earned will vaporize through the AI’s pesky efforts, a bad roll that puts you into a losing spiral impossible to get out from (although there are some awesome turnaround rolls tht can save your bacon) and so forth and so on. Once you get on a bad streak of losses, it’s like being robbed and beaten by a bunch of kids you’re babysitting. You’ll never live it down and never want to discuss it with others because they’ll never believe you got whipped to tears by a game this cute. Of course, you can prove yourself by setting up a solo game and letting people play, but I suggest a go at multiplayer, as all you need is a single controller to pass around to your soon to be ex-friends.

As a multiplayer game, Atlus marketed this as “The Friendship Destroying Game!” because of what live players would end up doing to each other as they played. You don’t want to play this game under the influence of anything, as the slightest error on your part will have you throwing a tantrum and perhaps some furniture around if you’re a sore loser. In solo mode, the game should have been labeled “The Confidence-Destroying Game!” because it’s relentless in letting you know that anything you do will be for naught almost any time you’re thinking you’re heading for a victory. If you manage to rake in a ton of money and are two spaces from winning a board, the AI manages to come up with some means to wipe out your stash and formerly easy victory, you’ll have to battle a tough mid-boss or boss that takes you out of action or something else bad will happen that sends your blood pressure soaring.

Now, I’m crazy, so I’m actually on the hunt for the Nintendo Wii and Nintendo DS versions of this one just to see if they’re equally brutal on the nerves. I know the DS version, Dokapon Journey is different in a number of areas as well as a bit hard to find and pricey as a new or complete version (how I prefer my physical media). However, I do recall seeing the Wii game relatively cheap in a few spots a while back (as in when I wanted nothing to do with it because the PS2 game had me wanting to beat my system to death). Edit: I just checked now and *yikes*, the Wii version is a wee bit overpriced these days in both new and used condition. Amusingly enough, I learned to play Dokapon 3-2-1 on the Super Famicom by setting the game to auto-play and watching a three-hour match play out before trying the game itself and managed to do well enough that I wasn’t trying to throw the controller through the TV. Dokapon Kingdom is a game where even if you’re watching someone else play, the minute you play it by yourself, it’s setting you up to fail miserably (and many times).

Granted, progress CAN be made in single player mode (yes, you can actually compete the story mode) and hell, the game is hysterically funny at times once you get a few hours in and into the groove of losing everything more often than you’d prefer. But unless you like games that play to beat you, the horse you rode in on and that horse’s mother to death by dropping assorted nasty surprises on your head at nearly every turn, I’d stay away from this dangerous Kingdom. That is, unless you love games that try to (and succeed at) breaking you every chance they get.