We have to stop meeting this way, but so it goes:

George A. Romero created one of the most influential, essential horror movies back in 1968 with Night Of The Living Dead, a film that still packs a punch on a few fronts. As his feature film debut, Romero’s flesh-eating ghouls would inspire a legion of filmmakers to copy and attempt to improve upon his film’s strengths. Some did, most didn’t. He stayed primarily and comfortably within the horror genre, making six follow-ups to the original along with some solid films such as Martin, Knightriders, and Creepshow.

I can still recall the first time I saw Night on broadcast TV late at night (I think it was ABC that ran it first), the network placed an on-screen overlay during the “news” segments that ran during the film so people wouldn’t think actual dead folks weren’t rising up to chomp on flesh. I forget how young I was, but even in its edited for, the movie had me half under a blanket and that surprise ending gave me nightmares for a few days afterward. A few years later when TV spots for Dawn Of The Dead popped up, I was actually so scared I decided not to try and attempt to buy a ticket. I saved that underage trial by fire for ALIEN, released a year later.

Side note: George lived up here in the Bronx – I believe in the same area I’m in now. Not that it matters much, but finding that out always made me think of another neighborhood guy who did well for himself. 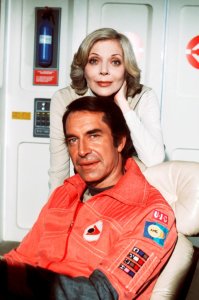 I remember Martin Landau from all over the TV landscape even more than his body of film work. From episodes of The Outer Limits, The Twilight Zone, Mission Impossible and many more, you got a journeyman actor doing his thing in fine form every single time (well, we won’t mentionB*A*P*S here). Of course, as a kid growing up in the late 60’s and into the 70’s, I was a huge Space: 1999 fan even when the show went from interestingly implausible to monster of the week mish-mash.

It’s difficult to pick a favorite performance of his, but his Academy Award win for Ed Wood along with his nominated work in Crimes and Misdemeanors and Tucker: A Man and His Dream are three of many standouts. Of course, huge Alfred Hitchcock film that I am, I have to slide in a recommendation to check out North By Northwest for his portrayal of Leonard, henchman and close confidant of James Mason’s Phillip Vandamm character. It’s not as huge a part as those other films, but the part seems open to interpretation if you decide to dig.

Losing these two on the same day is awful, but their work will live on as long as people continue to seek it out. Go watch some movies from this post if you’ve never seen them – or watch them again just to remember.