Still one of the best and most thrilling fantasy films ever made, The Thief of Bagdad is a perfect movie that’s stuck with me ever since I first saw it as a child. After years of experiencing it in black and while, I didn’t even realize the film was in glorious Technicolor until sometime in the 1980’s when I finally saw it after a few years and fell for its charms all over again.

Considering at least three and as many as six people directed the film and production went from England to America due to a little world war breaking out, the film is even more incredible. Yes, some of you have seen this countless times, but if you know someone who hasn’t, it’s time to change that. Sit them down with this gem when it pops up on TCM or just plop down the cost of whatever this costs on DVD and prepare to be transported into a fantastic fairytale world… 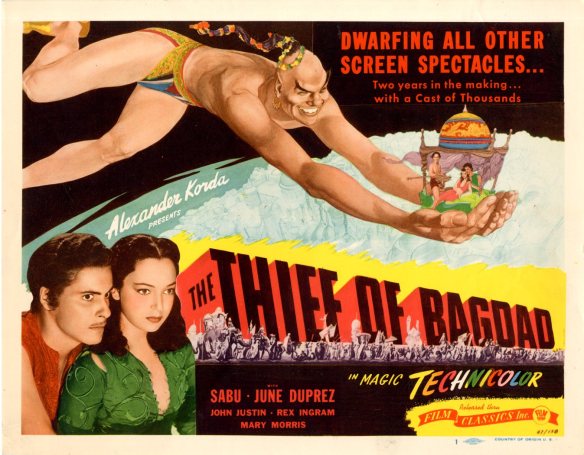 Where the original 1924 silent film was phenomenal and equally memorable (see it!), this remake enhances and expands the story by splitting the character played so energetically and flawlessly by Douglas Fairbanks into two separate heroes. While John Justin’s initially clueless and easily duped King Ahmad is certainly no Fairbanks in the looks and athleticism department, he’s a great leading man with the proper amount of eager emoting to carry his role.

The other half of the coin is Abu, the thief Ahmad meets played in a star-making turn by Sabu, who’s so perfect in the part that he seems pulled from the pages of a fairy tale. Like the thief he portrays, he steals every scene he’s in, a good thing, as he’s the heart of the tale being told. The groundbreaking visual effects had Sabu acting alone in the scenes with Rex Ingram’s boisterous and initially frightening Djinn (or “genie” to western audiences) as well as in the giant spider battle where he shows off his climbing skills on that massive “cobweb”.

In true fairytale fashion, the good versus evil thing is played up to its fullest. The great Conrad Veidt oozes menace as Grand Vizier Jaffar, who cons a curious King Ahmad to walk among the common people dressed like them. He then has Ahmad arrested and tossed in a dungeon where Abu also ends up. An escape to Basra follows and it’s there that the lovely Princess (June Duprez) is seen. Ahmad falls head over pointy shoes for her and although the penalty is death for any man who merely looks upon her, he slips into her palace and as he’s hiding in a tree above, “appears” to her as a reflection in the pond she’s about to bathe in. She initially thinks he’s a Djinn who lives in that water, but Ahmad reveals himself by dropping down from his perch. Naturally, the both fall in love at first sight and Ahmad arranges to see her again the next day.

Jaffar’s plans just so happen to involve the Princess, and his wooing of her father (Miles Malleson) with a wonderful mechanical flying horse (no, it didn’t run on Mobil gas!) actually has the Sultan basically trade his daughter for an over-sized toy (yikes). While that Princess is gorgeous, she’s not exactly dumb and decides to skip town with Ahmad, who still kind of needs to get back to Bagdad and re-become King. Jaffar traps them, blinds Ahmad, turns Abu into a dog (!) and shortly thereafter steals the Princess away. After some back and forth between the principals that restores Ahmad’s sight and gets Abu out of the doghouse and back to his nimble self, a magically conjured storm separates the two heroes and it’s Abu’s turn to shine.

Well, once he deals with a certain very large and very loud Djinn. This part of the film is the most magical and fun to watch, as it’s Abu versus the newly awakened Djinn is a battle of wits. Once freed from that bottle Abu finds on the beach, the Djinn wants to merely stomp him and fly away to wherever Djinn go once they’re freed. But Abu tricks him into getting back into the bottle before taming him (a little) and getting the requisite three wishes. Abu instantly uses up one to fill his rumbling stomach, but realizes he’s got to be careful with the remaining two.

That overconfident Djinn thinks he’s got an easy mark, but Abu’s cleverness manages to help him stay a step ahead of the big magical unbottled lug and his hang-nailed toes for a while. They strike up a deal where in order to save a wish, Abu needs to steal the All-Seeing Eye from a mountain temple’s massive statue guarded by strange archers and a really huge spider. The Djinn thinks Abu will simply die there and he’ll be rid of him, but Abu swipes the gem and it’s off to the races as tings escalate one final time.

Eventually, Abu and Ahmad are reunited (again!), but that last hastily yelled wish zaps Ahmad away to Bagdad a bit earlier than he’d like to be there. Oops. The now freshly freed Djinn gleefully abandons Abu in the middle of nowhere, but just when things are looking grim for the young thief, he’s transported to a mystical place where he gets hit with his true destiny and armed with gear than can stop Jaffar for good. One magic carpet ride later and there’s a fight to the finish and a perfect ending to a perfect film.

This is one of those absolute classics that’s managed to age gracefully and thanks to the 2008 Criterion version, is even better looking than before. The cleaned up (and Oscar-winning) blue screen effects look great, George Perinal’s Technicolor cinematography is superb and that flawless Miklós Rózsa score carries every bit of the film as effortlessly as that pesky Djinn carries Abu around. I know that for many film fans, The Wizard of Oz is their classic fantasy film of choice, period. But I’m more keen on this film because I find it flows better and has a more fantastic look to its visual effects.

A few years back, I once heard someone call The Thief of Bagdad “Gone With the Wind for geeks” and that made me laugh because I thought that was kind of stretching things a wee bit. Still, for a solid and highly influential fantasy flick of epic proportions that packs in a ton of tale-telling in a mere hour and forty-six minutes, it’s not a bad way to spend part of any day at all.

Say, in case you busted your own All-Seeing Eye and haven’t figured it out yet, this post is part of The Fairy Tale Blogathon hosted by Movies, Silently from November 9 – 11, 2014. Thanks so much for reading, drop a comment below if you like and absolutely check out the other posts written by some really fine folks!