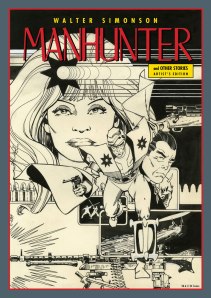 Well, wow. According to the fine folks at Comic Book Resources, IDW’s pricey and VERY desirable Artist’s Edition series is getting at least three more amazing tomes this year in a limited print run form only a select few will be able to get their hands on. To the press release, Robin!:

I’ve seen a few of the previous Artist’s Editions in person thanks to a friend who can afford to shell out for them and all I’ll say is they’re the closest thing to owning the original art you can get (at a far more reasonable price, of course). Expect superior quality reproduction from the originals, warts and all (hey, comic art SUED to be all hand-drawn and lettered!) and something you’ll not want to loan out or have the kids use as snack table reading after that finger painting session, that’s for darn sure.

Prices and release dates TBA. I’ll also see if I can dig up pics from that Lawnmower Man book, as it’s one of Walt Simonson’s quirkiest-looking stories in terms of the artist cutting loose and having a blast with his pens and brushes.