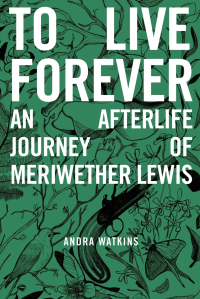 When Meriwether Lewis took a couple of bullets too many in his room at the Grinder’s Stand early in the morning of October 11, 1809, I’m sure Urban Dance Squad’s “Famous When You’re Dead” wasn’t playing in his head beforehand, nor was he thinking that he’d be immortalized in countless books, films and other media well into the present day.

In her new book, To Live Forever: An Afterlife Journey of Meriwether Lewis Charleston, SC based author Andra Watkins brings Lewis back to life in a beautiful and memorable manner, as his ghost becomes the guide for a young girl in 1977 as the pair travel from New Orleans to Nashville. Without spoiling much, the book grabs you from the first page and holds you down page after page thanks to Watkins’ solid pacing and fine writing style that blends fact, fantasy and fiction as the travelers work to overcome a few interesting obstacles of the living and dead variety…

The book zips between nine year old Emmaline Cagney’s world, “Nowhere”, the afterlife terminal of sorts where Lewis sets out from once he’s been chosen to be her guide and bits based on Lewis’ own journals written about the Natchez Trace journey. Watkins also introduces a rather creepy Judge into the book as a primary threat to both leads, but Emmaline is also running from her not so nice mother who happens to run a brothel (no place for a nine-year old, of course) and it seems legging it to her Daddy a few hundred miles away with a ghostly guide looking for redemption is the only way to make good her escape.

As the pages turn and the story wraps you into itself, there are moments of danger, drama and humor that make solid impressions as the miles pass. Like any good author, Watkins knows how to make her characters speak to her readers in their own voices and more than once during my read, I could see this making for a pretty interesting movie experience. Granted, the genre-hopping and intriguing historical slices from Lewis’ life mixed in with the fantastical elements might get some people expecting a more straightforward dry biography scratching their heads, but those are people who didn’t read the darn title of the book before picking it up. While it clocks in at over 300 pages, as noted above, they fly by as if a nice South Carolina breeze is flipping them and it’s possible to complete the book in a single sitting because of the phenomenal job it does at reeling you in.

In what could be called the ultimate book tour, Watkins took on the daunting task of actually walking all 444 miles of the Natchez Trace over the course of a month and a few days, and chronicled her exploits daily on her blog. That trip presented it’s own set of real-life trials and tribulations, but again, I won’t spoil anything here. If anything, she’s got enough material for a second book (and probably a short documentary), but I’d gather her husband wants to have some quality time with her before she turns into a one woman bookstore. Anyway, the book is available as both a physical and digital read, so you need to go buy a copy. I’m shutting up now so you can do just that.