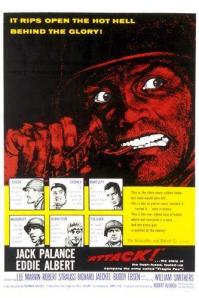 As far as war movies go, Robert Aldrich’s 1956 film, Attack! isn’t the predictable, lavishly produced jingoistic, rubber-stamped by the military rah-rah fest glorifying World War II as a unifying fight against the Axis where everyone on our side is perfectly portrayed as a sterling citizen soldier of upstanding moral fiber with one or two likable quirks. Instead, it’s a gripping slice of drama that pulls no punches as it details the breakdown in command of a whittled down unit of soldiers under the command of a cowardly captain (portrayed perfectly by Eddie Albert) and how another officer tries to bring a moral center back to the men before it’s too late.

According to a few sources, Aldrich didn’t get the usual assistance from the Department of Defense when making the film and in fact, had to make do with shooting the entire thing in just over a month using borrowed, bought or rented military gear including two tanks (that military purists will note were badly disguised as German Panzers). Despite this, it’s a powerful, must-see film that’s on par with Sam Fuller’s The Steel Helmet, or Kubrick’s Paths of Glory and Full Metal Jacket as one of the best films in the genre.

Performances are outstanding throughout, with Albert, Jack Palance (as Costa, the heroic soldier the company looks up to), Lee Marvin and Buddy Ebsen all doing stellar work here. As the aptly named Fragile Fox deteriorates due to Cooney’s lack of leadership skills and is forced into a terrible retreat when they’re caught up in the Battle of the Bulge, you’ll feel outraged that Cooney has pretty much been left to drive his company to their doom through his unrelenting incompetence.

However, Palance’s Costa ends up bringing life and light to the film with his words and actions, including a terrifying battle where he desperately takes on an approaching tank armed with only a bazooka, not enough rounds to destroy it and not enough room to escape should he fail. This is a pivotal moment in the film for a few reasons, but Aldrich’s tight direction and the excellent cast insure you’ll be glued to the screen until the finale.

Low budget, surplus props and short shooting schedule aside, it’s clear that everyone involved wanted to make the best film they could, and it shows in the final cut. The film benefits tremendously from the polished acting, directing, Joseph Biroc’s solid cinematography and a truly superb and haunting opening sequence directed by the legendary Saul Bass that in my opinion, is still one of the best title sequences ever created for a film:

In the end, you don’t need to be a fan of the war movie genre to enjoy Attack!, and come away moved by the experience. It’s one of those great movies that will stick with you after you’ve seen it and is worth a few viewings just to see a master of minimalism at work. Aldrich also directed a bunch of other great films (with bigger budgets), but I’ll let you do that searching on your own time. OK, soldier – move it on out and make this flick one you check out ASAP. That’s an order, by the way…

1 thought on “Random Film of the Week: Attack!”