Ah, the persistence of memory or, when the brain stops working, it still works some wonders. I was watching a certain movie a few days ago and the phone rang in the other room. Usually, I let the machine take it, but I was waiting for some important medical info to roll in. So I lowered the TV sound, ran to the living room, answered the call and heard what I needed to hear, then made a call myself to check something related.

That took, what? Maybe seven or eight minutes? I didn’t pause the film I was watching like I sometimes do, so that comes into play here (you’ll see). Was it good or bad news? That, as they say, is CLASSIFIED (well, for the moment).

Anyway, I was out earlier yesterday at the post office and who do I run into leaving the place, but that older woman I’d spoken to about her sci-fi and horror fixation. She was with someone she identified has her son, who was there to assist in picking up a very large package, which he got saddled with carrying. She stopped as I was coming in and said a cheery “Hi!” but before I could respond, she followed with a “Hey, you were wrong!”.

I was thinking “Whut?” as her son gently placed the box down and to the side, then decided better and as I was still holding open the door, carried it outside and placed it down, turning back to the conversation as we all stepped outside. She introduced her son, who nodded and said “Hello” and I returned the nod and greeting before turning to the woman as asking what I was wrong about.

She was smiling and wagging a finger at me (yikes). “Well, Andrée Melly was in Brides of Dracula, that’s what you were wrong about. I was watching a bunch of Hammer Dracula films last week and she was only in ONE of them”. I thought about it hard for a minute because, Hey, I WAS watching the movie.. last… wee…. Oh. DUH… Guess who was taking a phone call and then making one while letting his mind wander to something he thought he was missing, but it was actually in a film made two years later he kind of hated the vampire portrayal in, but found a certain lady to be the best thing about it?  It of course, didn’t help much that I totally thought of Melly in the supermarket when the woman mentioned her looking like a cat. She, too got her evil Hammer vampires mixed up, but I’d say I definitely aided and abetted because yes, Melly popped into my head immediately when that description came up and yep, I forgot what film she was in. Oof. So yep. I did cut that corner too close and hit a tree, thanks to a bit of overlooking. 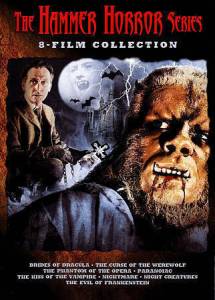 Hey, it happens – I recall once mixing up Gates of Heaven with Heaven’s Gate and recommending some people rent one of them and nope, they were not happy. Hey, both movies were about sad times, so I was SORT OF on track. Well, I decided not to change Dracula the review I did (yet) other that to place a note that goes to this post in the morning, but here’s the fun part in all this: I had to go do some errands after the post office and didn’t get home until late last evening. I’m about to pop some chicken in the oven and the doorbell rings. There’s a man outside, and when I open the door, he says he’s the husband of the older lady downstairs (Uh-oh!?) and she’s loaned me some movies to catch up on.

Guess what he was holding in his hand? Just look to the right, please. Well, I’ll be catching up with a few more old friends, that’s for sure. Yeah, I’ll have to also do a Brides of Dracula review even though it’s not my favorite film because the lead vampire… sucks, as it were. Oh well. At least I get to see Melly for real this time and not where I thought she was.

1 thought on “Board of Corrections: Like The Corners Of My Mind”