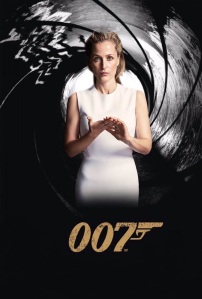 Not that I’m against a female MI6 agent at all, ladies and germs, but simply sex-changing James Bond isn’t the way to do it right at all. As much as some might want it to be, this isn’t a Mass Effect game or some over-smoked pot-boiled fan fiction with a much bigger budget. I took that fan-made concept poster and distilled it a bit so the “Aha!” people get where this is going. For the rest of you, here’s the idea that popped into my skull as soon as I saw that image:

Let’s say after a few agents gone rogue/missing/KIA, Her Majesty’s Secret Service institutes an order for all current and future agents to have special tamper-proof chips installed on their persons (under the skin somewhere) so every movement they make can be tracked for “their safety and efficiency” by the bureau. Of course, a certain mister Bond doesn’t want to be mod-chipped at all, and as he’s out in the field, can’t pop back to swingin’ Londinium to get that tracker installed.

A little casual interlude with a lady in some exotic spot has Bond waking up tricked, chipped and very pissed off, so he decides to call it quits not knowing that his quarry has discovered his whereabouts. Yep, in true Bondian fashion, that MI6 agent who tagged him gets caught leaving and significantly villained until she gives up his identity. Meanwhile, back at the ranch (or MI6 HQ), we find out the villain Bond was chasing has managed to nab him (hey, it happens) and presumably dispose of him for good. However, that new chip happens to still signal a life sign (it’s made to keep transmitting as long as there’s a heartbeat, but sends a different signal if removed or the agent dies), so it’s decided to send in another 00 to find out if Bond is indeed dead.

Guess who that might be (above the jump and left, please)?

The new agent is offered the options to take Bond’s 00 number if he’s indeed dead or kill him if she finds he’s been somehow turned against his former employers. Recovering that chip is also on her agenda, as if Bond is indeed deceased, it’s going to come in handy to Q Branch to find out why it malfunctioned. The title of the film would be (above and left once more, please) and I’ll leave the rest of this post to your imagination to see if you can figure how it all ends. I have a few ideas and I’m not sharing (yet).

Oh, as to the Jane Bond thing… yuk, no. Let the villain use it in a condescending manner when he or she realizes a woman is on the case:

and get it out of the way.

As for villains, I say sure, let’s get some more BAD girls and not just Bond Girls. I can think of a few actresses who’d do well as evil dominating ladies with more than their looks to keep eyes on them whenever they’re on screen. I won’t toss any names out, but I can also see a few other ladies acting as not so disposable security that female 00 will have to deal with. Hmmm… I wonder what Gina Carano is up to these days?  Yeah, I know some of you thought I was going to say Rhonda Rousey, but I didn’t. Oh, what the hell.  She can be in the film as well just so there’s a nice Hollywood fight between them where no one gets K’d the F out.

If the project happens, the actress should make the character her own, not just be a female version of Bond. That’s a more respect worthy way to take on the cultural dinosaur while offering the option to have two agents that share the 007 number for at least one film. This way, any future installments or spin-offs can please fans on both sides of the fence without burning all the bridges around it.