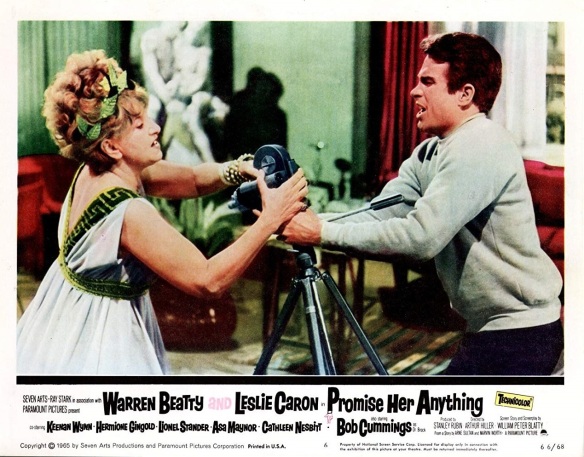 “Strike a pose, there’s nothing to it…” 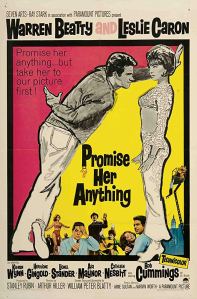 My brain wants its time back. My eyes… well they were pleased for a hot minute or two.

The very last thing you see before the end credits to Arthur Hiller‘s bizarre 1966 sex comedy Promise Her Anything is a red neon sign that says one word: STOP, which if it had appeared at the start of the film, would have probably saved me the trouble of watching this earlier this morning. To paraphrase Fight Club, “I am Jack’s flabbergasting 98 minutes.”

Let me hip you to the ’60’s era plot so I can get away with torturing, murdering and burying this one as fast as possible, although I may take my time with the torture part, as the movie is very much like scheduling a 98-minute session with a nearsighted dominatrix who happens to be stone deaf, owns a too short set of whips, keeps missing her target, her safe word is “Mister Mxyzptlk” and if you don’t sign it properly with the quotes, she keeps on madly whipping the air. I’ll first apologize to anyone who’s exactly like that in real life or has that particular fetish, by the way.

Anyway, here we we go: A lovely widow with a baby moves into a Greenwich Village apartment on the same floor as a free-spirited guy who makes mail order adult movies but has intentions of making it big in art films one day. They sort of hit it off (although she has no idea of the work he does), but she gets a job as an assistant to a baby-hating child psychologist and plans to woo him because she sees a good provider in that wealth he’s got. Meanwhile, her neighbor becomes quite a helpful babysitter… who keeps trying to bed his emotionally susceptible newly widowed neighbor while secretly putting her child in the films he’s selling. 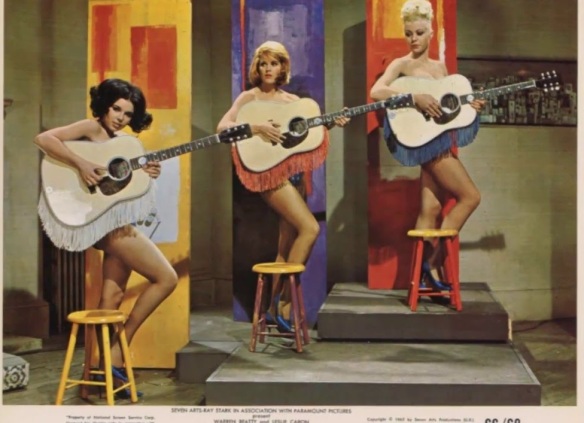 You’re watching this film for the girls, right? Bless your soul.

Well now, that’s kind of unforgettable for a few reasons, isn’t it?

Take a gander at some of the cast and do a double take if you like (the full list is on Wikipedia):

Uncredited cast members include (in order of appearance), Kathleen Hughes, Jo Anne Worley, Donald Sutherland and a few others, but you get the idea. Oh, there’s also a really good Tom Jones song wasted on this mess, but go big, or go home, right? 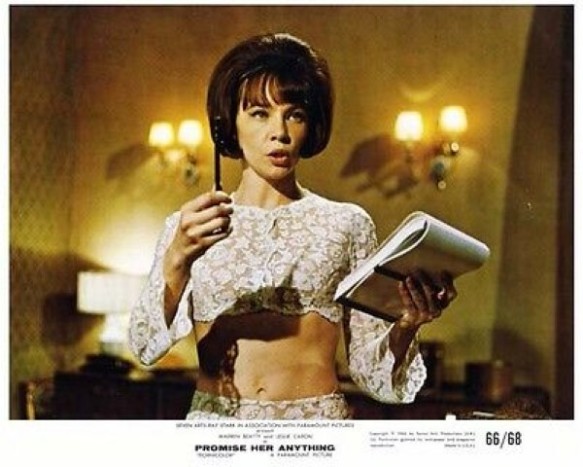 The problems here to me are this movie isn’t that funny even with the more veteran members in the cast, and lead Warren Beatty is so miscast that it dooms the picture whenever he’s trying to do comedy. Leslie Caron (whom he was in a relationship at the time) is more amusing and even quite sexy when she appears in a body hugging white lace two-piece number that’s worth watching out for. But the film feels almost like a much later film where two stars also turned their love lives into spark-less onscreen fireworks. Gigli, come meet your grandpa.

The other young ladies here show up in assorted states of mostly tasteful undress, either posing or gyrating briefly, so it’s all up to you if you’re a fan of this sort of thing and want to suffer though the plot. Well, there’s also Hermione Gingold posing briefly in a scene, so get ready for that (don’t worry, it’s not what you think). Remember, it’s the swingin’ ’60’s and there’s really nothing you won’t see on a beach (I think Beatty’s character says this to Caron’s at some point later in the film). 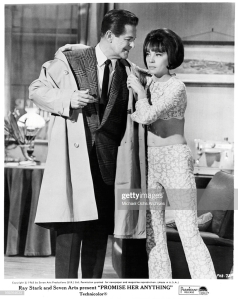 The Bland and the Beautiful – Robert Cummings + Leslie Caron = 0 chemistry.

Maybe it’s Hillers’s direction? Hmmn, but he’d ably directed a few favorites of mine, so that doesn’t quite fit as an excusable unless you grasp that even a good director has a bad film in them somewhere. That said, the film does try a bit too hard with the kooky vignettes and the ending is an awful (and awfully unfunny) steal from It’s A Mad, Mad, Mad, Mad World, but with Beatty and the baby spinning in a crane truck basket. I was watching this and wondering what Billy Wilder would have done with the material, as he made even the smarmiest stuff sing.

Maybe it’s the script? Well, let’s look at that, then. Two people wrote it (Arne Sultan, Marvin Worth) and that effort was turned into a screenplay by William Peter Blatty (!), who’d scripted a few film comedies around that time. I don’t think demonic possession made him do this, as he was five years away from writing The Exorcist and hell, I don’t believe in possession anyway (ha-ha, he said, looking under the bed just in case).

Maybe it’s the cast? As already mentioned, the star isn’t good at all at comedy at this stage of his career, although he does get the mechanics of it down. Yet, it always felt to me as he was acting a part, not inhabiting the character. Everyone else is pulling their weight,  even Lionel Stander, who overplays such a leering and lecherous character here that I laughed a bit nervously when he was pawing Asa Maynor‘s rather pneumatic Rusty with a bit too much glee. That baby in the film is a million percent annoying and I think he was dubbed by either an older child or an adult trying too hard to act like one. My brain says Robert Cummings was told to set his dial to stun to make Beatty look better but to be fair, their lackluster performances were both weak to me. 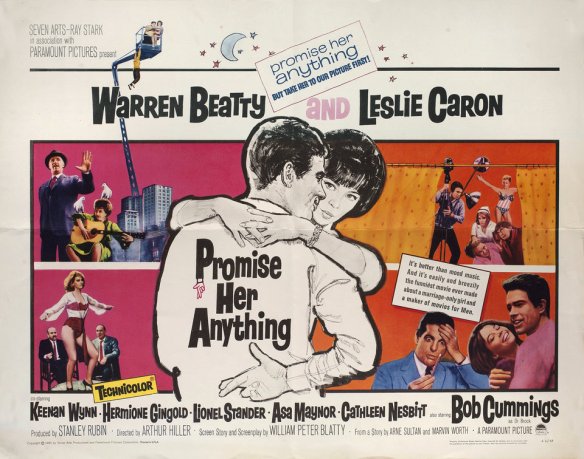 Worse, the film feels like a poor man’s Carry On flick, which is funny because it was a US/British co-production and was filmed at Shepperton Studios posing as New York City. It also seems it was expensive to make at the time, but I could be wrong here. Eh, someone will like this, and those people can be commended for doing so. Me, I saw it once and I want my time back. Oh, and that ending after all that spinning around? Maybe the worst product placement I can recall, as it mentions a famous airline and references the biblical cities of Sodom and Gomorrah in bright neon letters. Yeah, even as an atheist, that made me do a Exorcist head spin double take. 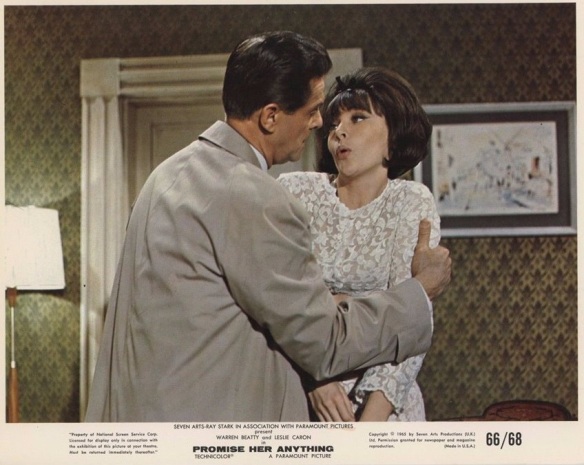