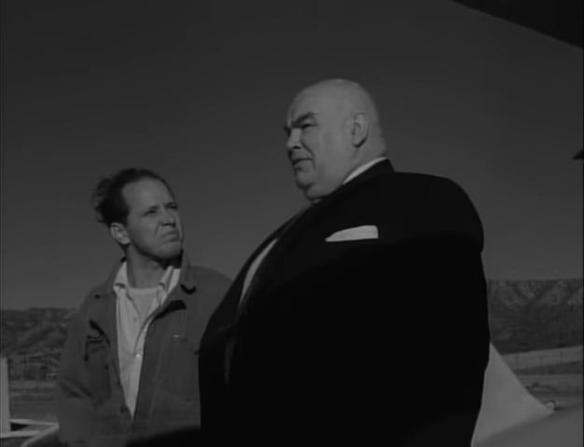 It’s too hot for meatballs, but it’s going to get hotter, Tor. 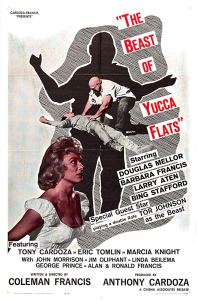 I first saw this really awful and brilliantly bad sci-fi flick very late at night some years ago and again recently after overhearing someone in a diner hilariously recast the Avengers movies as period pieces set in the early 60’s. Yes, Tor Johnson was The Hulk in that person’s version. While you roll that around in your noggin, be warned that The Beast of Yucca Flats is a pretty horrible movie with only three redeeming factors:

3. It almost makes Plan 9 from Outer Space or Robot Monster look like Star Wars movies (which ones are up to you). 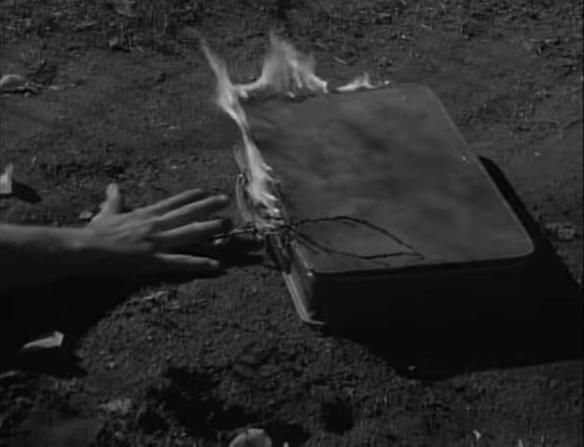 I hear they actually lost the shooting script in a fire…

Anyway, there’s a “plot” here: A Russian scientist named Joseph Javorsky (Johnson) decides to defect to the US, but with KGB agents hot on his tail, he runs into a bit of atomic-fueled trouble after entering a nuclear test zone and a bomb explodes (oops). The portly egghead turns into a portly monster who’s not a egghead, but his makeup looks like egg on his face and before you can say “Ain’t he un-glamoraze?”, he’s wandering the area yelling and screaming (silently, as the film opts for refrigerator poetry narration and no dialogue). Wait, Tor Johnson playing a man of science? Uh, okay. With that jacket on, he looks like the Kingpin if you ask me.

The atom age monster strangles a few people and some police or detectives or whatever chase him around the area. There are two lost boys in danger used as a plot device. Scenes shot that are supposed to be from an airplane seem to be shot from a plane on the ground with the camera close in and pointing slightly up. The film starts out with a woman who’s just bathed exposing part of a breast and then she’s briefly in underwear before being strangled and seemingly assaulted. There are shorter versions of this scene in some prints, but for a 1961 film, I was surprised when I finally saw this. Some folks get confused at this pre-title scene as it doesn’t happen in the film proper. But it’s supposed to be the monster Javosky’s become as he’s on a rampage and the film omits this explanation (it’s easy to figure out, though). 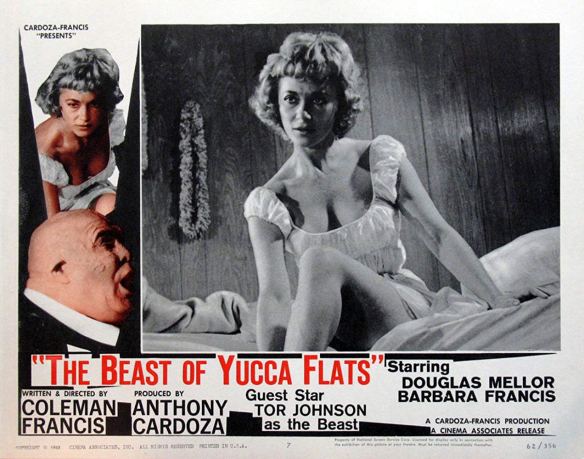 “There’s cheesecake on the bed, if you want some…”

As noted, there’s narration present and accounted for and even music. But both are not very well done, with the narration taking the prize for pure rambling nonsense, although there’s a mention of a flag on the moon, which is YEARS TOO EARLY. So perhaps director/narrator Coleman Francis was some sort of savant in his forward thinking? Eh, maybe not. Between the loopy narration and the bad music, the story plays out in what seems to be “one take and done” fashion – the Rise and Fall of Javorsky, The Monster would be the stage play name. Or not. Maybe it could be a musical? Wait, but then I’d have to write a CATS reference and I still haven’t recovered from seeing that piece of work.

By the end (which I read was improvised when a stray jackrabbit hopped into the shot) you’re either going to be yanking you hair out laughing or yanking your hair out cackling madly and looking for the guy who recommended this Grade-Z schlock-fest. All I know is it wasn’t me, because I didn’t recommend this and I need a fall guy to go hide behind who can take a punch. I’m not going to rate this, but I will suggest more people see it so that can have a barometer to judge some films by. All this arguing over films these days makes this one and others like it suddenly invaluable, and isn’t that a hilarious thing to see?

(* Or, you might be wondering “what the heck did I just watch??” after 54 minutes. Your mileage may vary)

3 thoughts on “Random Film of the Week Quickie: The Beast of Yucca Flats (1961)”