“On a clear day, you can see forever…” 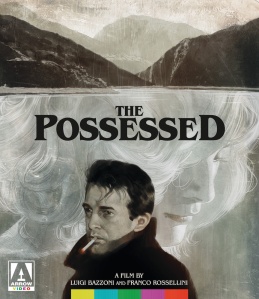 Given the subject matter, The Lady of the Lake is a better title than The Possessed, lets get that out of the way first and foremost. Granted, it’s also the name you’d use if talking about the legend of King Arthur and with a slight tweak, it’s the name of a 1947 film noir classic that’s a neat experiment. Still, this 1965 Italian murder mystery from co-directors Luigi Bazzoni and Franco Rossellini is a compelling, arty proto-giallo well worth a look.

The film blends both director’s styles in an impressive and intentionally at times hard to follow plot, but its intents are made to keep you guessing what’s true and untrue until the mystery is resolved. While based loosely on a series of actual murders, the at times dreamlike presentation keeps things a lot less grounded as our less than heroic “hero” figures out why the gal he was so madly in love with was possibly murdered.

Virna Lisi as the ill-fated Tilde. She’s not a good girl, it seems.

Bernard (Peter Baldwin), a morose young man with a bit of fame is in the process of writing a new book, visits the same slightly dull Italian village he grew up in only to discover that a pretty maid named Tilde (a stunning Virna Lisi) working at the local inn has died. A little poking around reveals she may have been murdered, but why is that important information held from him (“You didn’t ask.” comes one rather surprising answer early on) and why are there a few potential suspects that happen to be from the same family that owns the inn?

Hmmm… why, indeed? Tilde only appears to him from a few mysterious dreams and flashbacks that may or may not be related to Bernard’s mental state, so he’s maybe as unreliable a narrator as it gets. Hey, at least his hazy, surreal nightmares are pretty darn interesting to say the least.

There’s a number of haunting shots in this film, so I’m focusing om the no-so haunting ones.

Now, Bernard has his own issues, so he’s a odd choice for a hero. But he’s compelled to do some digging after the village’s hunchbacked photographer (Piero Anchisi) shows him a rather revealing picture (it’s not what you think, I think). Some of what transpires next is predictable, some isn’t. But it’s all shot in such a manner that as Bernard slips in between his dreamlike and waking states, the line becomes a bit hazy as to where some of the truth lies. Who was Tilde sleeping with? Was Bernard on her list of conquests or has he imagined it? What’s the mystery around Mario and his wife (Pia Lindström, yes, that Pia Lindström, New Yorkers in the know may know of)? Most of these questions do have answers, mind you. The film goes through some artsy, welcome tuns while you figure it all out.

Yes, it at times can be a shade strange, but it fits Bernard’s mental and physical state on display as rendered though Bazzoni and Rosellini’s lenses. As the film winds its way towards it conclusion, Bernard discovers who the killer is only after a few more deaths he probably couldn’t stop in his condition (he gets a fever at a certain point that keeps him from doing much). Things close on a less than happy note with what can be called a resolution, but it’s definitely not a happy one for a number of people. Arrow has done a stellar job with the transfer as usual and includes a nice slice of bonuses for good measure as noted below:

I’d say you need this in your possession at some point (ha ha), especially if you like your mysteries on the off-kilter side of things with a memorable score and more than a few haunting images to linger in the mind longer than expected.

You could say the poster art is to die for, but let’s not push it.

4 thoughts on “Review: The Possessed (Blu-Ray)”