Flying Tiger Entertainment has been dropping some awesome Data East arcade hits from the 80’s and 90’s across a few platforms, but thanks to my rather hilariously large backlog, I’m just getting around to playing my first title in the Johnny Turbo’s Arcade series: Nitro Ball ($7.99). This one’s a 1992 oldie that’s an instant classic in the form of a killer mash-up of Smash TV and a crazy pinball game without the flippers full of super busy rapid fire action that’s packing a heap of period pop culture references doctored up a bit but still very recognizable if you know your classic 80’s flicks pretty well. 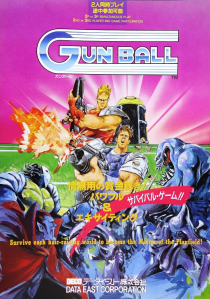 I’d make a “Gun Ball Rally” joke here, but almost no one would get it.

I very vaguely recall this machine from my arcade crawling days, so getting the chance to see and play it again got me grinning immediately despite a wee bit too many deaths that followed. Things are quite chaotic right from the start and like any great arcade game, you’ll likely spend the first few minutes learning the ropes and figuring out how to stay alive in order to make it to the next part of a map.  While it’s only got five stages (Strange Football, Combat Field, Ghost Town, Aliens World, Space Station), as you’d expect if you’re an educated fan of these types of games, it’s all about the replay value and the many laughs you’ll have while blasting through those maps multiple times. The difficulty ramps up in spots as enemy goons swarm in from all sides and yes, sub-bosses and bosses can be cheap (hey, they’re just doing their jobs!). But overall, I’d call the game pretty balanced.

PROTIP: This strategy is actually quite helpful in real life. Use it often.

As this is one of those goofball arcade masterworks bent on chomping money from your wallet (well, back in the day), you’re certainly not picking this up for an engaging plot. The game’s lightning pace, up to three player capability (you’ll need a third Switch Joy-Con or other compatible controller) and tons of loot drops keep things popping and yes, you’ll be racking up those high scores and hopping back in for more. As this is an arcade perfect port as far as I can tell, it comes highly recommended as both a nifty slice of arcade history as well as a mighty spectacular offline multiplayer game for those who groove on couch co-op play.  While the game emulates a few television visual styles, I can’t see many players flipping their HD sets to one side to play in that widescreen mode, but it’s nice to have the option. I did try to play this sideways, but went back to the more palatable  arcade view,  sans scan lines or the curved screen effect.

Yes, you can TRY to play the game this way, but neither I nor Flying Tiger will take responsibility for that crick in your neck (ouch!)

By default, the game sticks to the arcade’s single stick movement/two-button action control, so I also decided not to mess with configuring the controls in order to keep the gameplay exactly like the original machine. The game’s tough but fair, is easy to get into and yep, fun for the whole family. Er, unless that family doesn’t like over the top action that’s going to make them laugh a lot as they play. This one’s a keeper and I’m certainly going to be checking out what else Flying Tiger has in store as they bring back more old faves (and likely a few games I’ve yet to try or have just forgotten about after so many years). I hear Night Slashers is in the works as a future release and I can’t wait to see that one, as it’s been about 25 years since I’ve played it (and I’m sure I’ll be seeing plenty of GAME OVER screens on the road to victory).