Microids‘ upcoming Agatha Christie: The ABC Murders hits European retail and digital outlets next week for PC (via gog.com or Steam) and US online and retail a few weeks later. Some hands-on time last week with the demo reveals mystery fans will have a fine time indeed playing dapper detective Hercule Poirot as he takes on that clever killer with the alphabet fetish and a talent for leaving clues galore. The demo features Poirot investigating the first murder (a shopkeeper found dead in her tobacco store) using his “little grey cells” in some simple to learn gameplay that should please casual to expert gene fans. 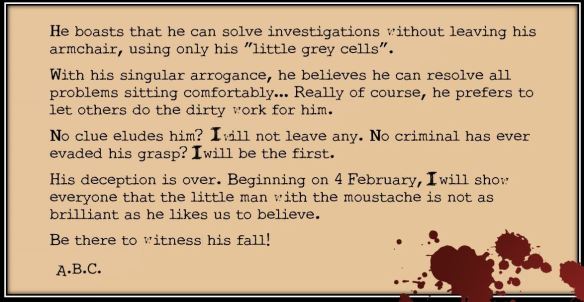 True to point & click form, hunting for clues is done by selecting objects in the environment and in some cases, rotating them in order to inspect for hidden clues such as symbols or fingerprints. Poirot keeps a record of every clue he discovers and yes, the game allows the option of highlighting searchable objects if you need a hint on where to look. There were a few items of note well hidden in puzzle segments where you’ll need to figure out how to open a cabinet or get into a secret compartment to advance the plot and thankfully, the game controls well with either a mouse or game controller. While Poirot has free roam of any area he’s in, in a few spots you can’t advance until you complete certain tasks. My own brain wasn’t stumped for longer than a few minutes by one of these tasks, but that was because I’d avoided looking at one item I’d not been able to interact with until a second look.

The demo ended just as things were getting good (as in Poirot figuring out a person who looked like a key suspect ending up not being the man of the hour), but it made me psyched to play the rest of the game just to see who’s next on the alphabet killer’s list. I haven’t read the Christie novel in quite some time, so I’m coming into this game with expectations to be surprised and pleased. Developer Artefacts Studios has noted that they’ve altered the original plot a bit, so I’ve resisted the temptation to revisit the book until after I’ve played through the game. No nit-picking about “perfect” translations of the book here, folks. My interest lies more in how the dev team has turned a great mystery story into a game playable by anyone who wants to give it a try.

So far, The ABC Murders is looking like a winner for mystery fans, but Microids wants to make a REAL winner out of some lucky folks. Boogie on over to their facebook page and check out the rather unique contest they’re running. Who knows? You just may walk away with a nice surprise for a little bit of clever detective work of your own.

Agatha Christie – The ABC Murders is due to be released on February 4th, 2016 in Europe on PS4, Xbox One, PC and Mac. In the U.S., the game will launch digitally on PC/Mac February 4th, 2016 and at retail February 23rd on PC/Mac, PS4 and Xbox One. The game is dubbed in English and French and subtitled in English, French, German, Italian, Spanish, Brazilian Portuguese, Polish and Russian.