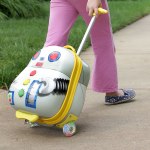 While this year’s National Robotics Week has already passed, you have until April 2, 2015 to snag something if you’re one of those people who celebrates these oddball non-holidays religiously (there’s a joke in there somewhere). ThinkGeek is of course, there for you and all your odd robotic or non-robotic gift wants and needs, so below the jump is a gander at a few items that caught my eye from the company’s latest email blast…

First up are these cool Robot Slippers ($23.99, reduced from $29.99) that look really cool, seem perfect for all sorts of indoor fun (I’d not wear these outside when it’s rainy out or when mopping that kitchen or bathroom floor) and as you can see and hear, make robot-like noises when you move around in them. Granted, any stealthiness you attempt will FAIL miserably while wearing these, but at least you’ll sound awesome when you DO fail. 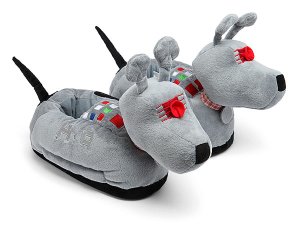 While they don’t make a sound and ONLY come in two women’s sizes (S/M fits Ladies’ size 5-7,L/XL fits Ladies’ size 8-10), these ThinkGeek Exclusive Doctor Who K9 Slippers ($23.99, marked down from $29.99) are still a pretty nifty gifty for that gal you know who’s a Whovian of some sort.

Granted, if she has her own REAL life K-9, that pooch may see these slippers as a double enemy of sorts, a doggie Dalek and not the Fourth Doctor’s clever chess-playing metal companion. I don’t suppose ThinkGeek sells any sort of exclusive Keep Your Doggy Gums Off My Slippers, You Silly Pooch! Spray, but it never hurts to poke around the site. Or at least if you DO get a pair of these, make sure your pet knows they’re not to end up ripped to shreds. Although, I’d imagine if you’re a cat owner, you’ll be wishing that feline wasn’t so damn hard to train or herd away from your beautiful non-barking booties…

Next up, is this cute umbrella toting ‘Brella Bot necklace ($14.99, marked down from $19.99). As whomever the copywriter is already punned it up by also dubbing this “Mary Bot-pins”, I don’t need to waste my one bad pun for the week on a Monday (thus saving you from cringing off whatever you’re sitting on).

Anyway, this zinc and aluminum piece should please those with nickel allergies, is probably NOT guaranteed to function as an actual umbrella (unless you’re under 1.75 inches tall and can somehow hold this cute thing over your head). and in general, should make whomever gets if quite pleased indeed. Unless of course, you hand it to that robotic cashier machine at the drug store, in which case you should expect: a) an emotionless response and b) to be charged again if the machine recognizes the item as in that store’s inventory. Otherwise, expect c) to be tossed out of that store on your ear for trying to woo a non-sentient hunk of metal, plastic and other materials.

Finally, if you’re a parent or guardian tired of lugging your own luggage and that of your young charges, get them something to carry their stuff in they’ll never want to let go of. Meet Luggo, your robot-like (but not really robotic) solution to all sorts of carry-all issues.

Luggo converts from a suitcase to backpack, has lighted wheels and yes, looks distinctive enough so as NOT to be confused with anyone’s bag at the airport (unless the country goes Luggo mad and every parent or gift-giving adult grabs one). Before that happens, you should be the first on on your block to get your paws on one of these at the currently reduced price of $24.99 (down from 39.99).

Of course, the one other probably downside of this cute carrier is some overzealous TSA agent thinking it’s an actual robot and running it through that X-Ray scanner something like twenty times because he or she keeps seeing clothing and other kid’s stuff instead of wires, wheels and other gadgets spinning and whirring inside. Some of these agents can get a wee bit TOO into their jobs, as we probably have all experienced. Anyway, I’m out of room and you have some shopping to do, right?