One of the main hurdles (if not THE main hurdle) for some gamers who lobe Japanese games is the language barrier. Another hurdles is laziness when it comes to learning new and important things like languages. Yeas, I said it and you can go on ahead and admit it if you’re reading this and happen to collect or be interested in collecting and playing games from Japan. Some of you (your narrator included) know a teeny tiny bit of the language but just haven’t had the time to sink into some proper learning situations for assorted reasons (lazy!) or are indeed too busy to seek out a tutor. Or we’re just too darn cheap (hey, a good tutor costs good money!). Anyway, Strawberry Games (Jitesh Rawal, Sayuki and Dan Tsukasa for now) is working on what’s looking like a fantastic solution and yes, it’s a Kickstarter project worth helping fund for a few reasons…

Koe (声) will be, according to the Kickstarter page “a role-playing game in the style of traditional JRPG games such as Dragon Quest, Pokemon and Final Fantasy”, is VERY early in the development stage and of this writing is already about halfway funded towards its £35,000 ($ about 60,000 give or take $1,200) goal. I love the idea of playing and learning as you go and based on the description and stretch goals alone, this one looks as if it’ll be one of the more interesting game projects many will want to jump on board early.

With 31 days to go, it seems quite possible that this will be funded and go over its target (meaning there may be a PlayStation Vita version I’ll be more than happy to play when it comes out) and it would be nice to see this sort of thing catch on with other languages.

I know the game’s growing community will have loads of suggestions (such as vocal pronunciation of each word learned and ideas about the visual style as the game progresses), but as long as they’re funding it, it seems it will all get done and more. I’ll be keeping an eye on Koe as the project progresses, as this may be a veritable game changer for some out there mystified by all those funky characters. 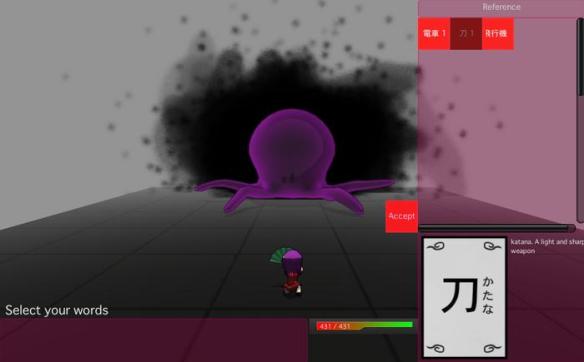 Of course, it won’t put a stop to those generally well-intentioned fan translations that pop up all over the place for old to current games, but if it makes more play games in their original language, all the better I say.