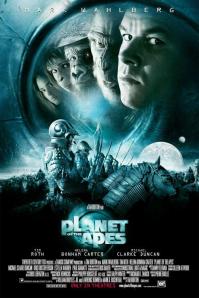 Thanks to reports from around the internet and a few periodicals about all sorts of problems during the pre-production phase and more issues during the rather speedy shooting schedule to meet a July release imposed by 20th Century Fox, I certainly didn’t want to see the otherwise reliable Tim Burton’s Planet of the Apes remake, but my mother sure did.

I was camping out at her place during that summer after a breakup and on the day the film opened, she pretty much rolled up on me and said we were going to the movies, so off we went. The funny thing was 33 years earlier, she took me, my older brother and sister to see the original film (my first movie experience), so I guess she was trying to jog my memory a bit out of the funk mode it was in. Well, that worked to a point as we both ended up not liking this remake much at all.

Of course, I ended up heading back to that theater a few days later to make sure I was sure I didn’t like the film…

The movie wasn’t much better on a second viewing, but I’ll at least give it major credit for Rick Baker’s fantastic ape makeup, some action scenes and most of the visual effects. On the acting side, Helena Bonham Carter’s Ari, Paul Giamatti’s hilarious orangutang Limbo, Tim Roth’s sinister General Thade and Michael Clarke Duncan’s Colonel Attar all do convincing monkeys and apes, but other than a handful of scenes, there’s little of Tim Burton’s style on display. The film looks great, but lacks that soul Thade is trying to find at one point in Mark Wahlberg’s mouth. As astronaut Leo Davidson, Wahlberg himself is problematic here and the worst thing about the film. Sure, he’s a good actor that’s gotten better over time, but here he comes off as someone trying hard (too hard) at every emotion the script requires.

Then again, none of the other actors playing humans are all that interesting to watch, but the same could be said for the mute extras in the original film. Kris Kristofferson’s character gets bumped off fairly early and Estella Warren just gets to look pouty and jealous or wide-eyed and scared as she gets pissy about Ari maybe flirting with Leo or she’s running from danger. On the other hand, in the original film Charlton Heston’s Taylor has his fellow astronauts to talk to and interact with from the time they crashed on that planet until that thrilling hunting scene that revealed the first of many shocks. Here, the film starts off with Davidson stupidly chasing after a chimp in a space pod that get caught in a time warp and he ends up going through, crash-landing and pretty much coming up for air running for his life as he meets up with the local humans and is caught in a similar roundup.

The film tries to make some parallels between human and ape life being the same on some social fronts and on that note it succeeds. Charlton Heston pops up as an ailing simian in a cameo with a nice speech with Thade by his side and there are a few other nice bits, all ape related. But running time is the issue here so other than the dinner party sequence and a fun chase scene where Leo literally drops into trouble as he’s chased in and around some ape dwellings, the film wants to move on to other things. Action movie trappings make up the last portion of the film and while some scenes are great (the packs of running apes are brilliant and fine mix of live action effects with CG enhancement), the move falls back on the usual explosions and near-misses and last minute escapes before pulling a final trick with that ending some like and some hate.

While the film made a lot of money at the box office and that ending set the ball on the tee for a sequel on purpose, Fox didn’t take a swing at it, instead choosing to hold out and start the Apes ball rolling again in 2011 with Rise of the Planet of the Apes, a film I’m not sure how I feel about. The CG work was overpowering to a fault, but Andy Serkis’ performance as Caesar was magnificent. Well, THAT film is getting a sequel this year, so it seems it’s going to be the one people will recall more than Burton’s in the future. My mom didn’t see that film in a theater, by the way – I think she saw it on Demand a few months before it dropped into cable as a staple. I chose to wait it out initially, but saw it was still in her queue and could be called up on the other TV in the living room, so I checked it out and just sighed as the credits rolled.

At least they ended on an interesting and more cyclical/cynical/clinical note than the remake, so I’ll give it that much…