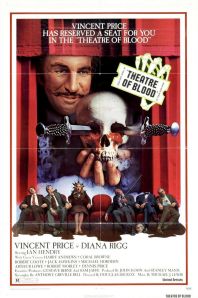 I can recall as a kid really, really wanting to see a third Dr. Phibes movie after enjoying the first two back in the day and being nicely surprised that Theater of Blood is basically Vincent Price back as a similarly maligned character with a lovely female assistant (Diana Rigg) bumping off in some rather offbeat manners those that did him wrong. Granted, Price here plays the wronged Shakspeare quoting actor Edward Kendall Sheridan Lionheart as less determinedly psychotic than Phibes and more of someone who’s otherwise a likable man bullied by his critics to the point he decides to clean up the gene pool a bit.

But beggars can’t be choosers at all, and Douglas Hickox’ great, campy as all get out plus tax film packs in some nice 1970’s blood and chills in about an hour and forty five minutes of running time. Although it’s nowhere as gory as straight up slasher films that would pop onto screens less than ten years later, some of the kills here win awards for creativity and sheer ACME-style setup and payoff moments…

Poor Lionheart goes after his worst critics hard after a career of putdowns and jabs at his work playing The Bard’s assorted characters by them culminates in his being turned down for a big award. This sends him over the edge and one faked suicide later, the game is on as one by one the snooty elites get whittled down by some incredibly elaborate means. Our talented thespian is more than ably assisted by Rigg’s equally irked and thus, oh so helpful Edwina, who plays all the right cards and pulls all the right strings as she helps her daddy do in these dupes. The murders are all based on Shakepeare’s works with a modern (well, 1973) twist, so as noted above, expect things to get icky in some cases. That said, some of the murders are actually really darn FUN (poor Robert Morley, is all I shall say), some are pretty amusing at first, then shocking (getting stabbed to death by vagrants, drowning in a huge wine cask) and others are disturbing because you’re chuckling at one less critic in the world and not minding one bit.

Of course, with our man Lionheart presumed deceased, there’s a police inspector on the case and trail of sweet but angry Edwina but he loses the trail thanks to a bit of intervention and slight comic timing, she gets away for the moment. As the body count rises, naturally something has to give and indeed, it does. No spoilers here other than to say when you’re in the process of a creative killing spree, you need to choose your hired help really carefully. Price plays his part perfectly and just like a man wronged by his peers that feels as if they truly don’t see him as he see himself and it’s grand to see and hear classic Shakespeare lines rolling from his tongue. Rigg uses her genuine prettiness well here by playing Edwina not as some google-eyed tart, but a someone who’s as off her rocker as her father in a clear case of the apple not falling far from the tree. One can only imagine her early life with Pa Lionheart as he came home after a hard day of “To be… or not to be-ing” to rant about each of their future victims as his little Edwina took it all in… and took copious notes.

Anyway, justice is done as the Liohearts are undone, the films ends with a big fire and a funny rejoinder and you’ll be sitting there with that remote in hand ready to watch this again. This is one of those films where you can see everyone having a rollicking good time in all that makeup and stage blood and hell, Price’s stunt double gets to do a nice flip off a trampoline during a freakin’ sword duel! Yeah, this is one of those flicks that’s just plain fun to watch by yourself or with like-minded friends. Even if you’ve seen this too many times, it’s one of those excellent genre flicks that holds up to repeated viewing thanks to all the pieces falling very neatly into place. All the world ma be a stage and we all may just be players on it, but Vincent Price was, is and will be one of the main Masters of Horror for all time thanks to one of his best ever roles.