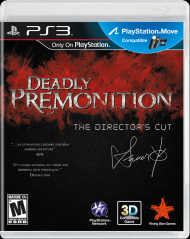 Just like its original incarnation as an Xbox 360 game, Deadly Premonition: The Director’s Cut is a victory of surprising supernatural and surreal substance over what’s expected by some as visual “style” in a game this generation, and that’s exactly what makes it just as much fun to play as before. Actually, better aiming, vehicle controls and a handful of PS3-specific features make this the content superior version, as do the new brief movie segments that add a tiny bit more lore to the story. The frame rate takes a dip here, but this new “flaw” actually adds an even more dreamlike quality to the game and definitely isn’t as bad as some have noted. I’d gather some new players won’t notice it all that much because the game’s general weirdness in every area demands and commands one’s complete attention.

Game Director Swery 65’s mind-bending tale of a grisly ritualistic murder investigation in a sprawling, formerly prosperous lumber town is highly inspired by David Lynch’s Blue Velvet and Twin Peaks, yet the game also manages to feel like a grand tour of Swery’s own diverse thoughts about assorted movie trivia, TV shows and a few other things. While parts may look and play like a more standard survival horror game, in fact, DP:TDC is more of a story and exploration-driven open world adventure that happens to have action elements starring a main character who’s mentally unbalanced yet a pretty damn good investigator.

Of course, FBI Special Investigator Francis York Morgan (just call him York, everyone else does!) is only one of many offbeat characters the game introduces in its own laid back manner. Key to enjoying this game is completely surrendering yourself to its pacing, intentionally terrifically bad voice acting and visuals straight out of the PlayStation 2 or Dreamcast era. But, you’re not playing this for the graphics at all (and certainly not for the car handling). This is a game best enjoyed as the episodic interactive TV show it’s pretending to be that you may hate at first because it’s not as pretty as you wanted it to be, but grows on you because you got caught up in the weird web it’s spinning.

As York makes his way around Greenvale, the game dips in and out of reality as clues are found and examined  (“Profiling Start”) and he’s transported into an alternate version of the town where creepy shadow monsters (and his own internal demons) dwell. Some of these transitions are unexpected, while others take place just where you’d think they should. The bulk of the game’s combat is done in these gloomy locations and is pretty simple if you’re not easily rattled by the unsettling moaning and other creepy noises you’ll hear coming from your TV’s speaker. To shake things up, the game has a few extremely tense split screen chases and quick time events where York needs to survive some up close and personal moments with that Red Seeds Killer he’s after.

Between the mayhem, there’s Greenvale itself, a town with only a tenth of its population left after its logging industry went under (which makes for plenty of driving to and between missions). Time is a factor when driving from place to place in most missions, although the clock stops once you get to your location and you’re allowed to explore at will. Most alternate maps are linear or truncated versions of real Greenvale with areas blocked off by strange barriers that force York to find new ways around. Gone are the different difficulty levels from the Xbox 360 game, as playing DP is all about following the plot as the investigation goes on, not shooting or bashing away at stronger versions of it’s shadow creatures.

The “enhanced” PS3 visuals run at what looks like a slightly higher resolution than the 360 version (gamers with standard definition TV’s and both versions won’t notice much at all) and the major issue with York’s turning and camera movement has been fixed to be much better here. PlayStation Move support is solid for the most part, but you’ll want to use the controller for any driving, as it takes some getting used to. On the 360, driving was like pushing a toy school bus with square wheels, while on the PS3, it’s more like pushing a toy school bus with regular wheels across Greenvale’s wide and narrow roads. Save for some of the more unsettling noises from creatures and some environments, sound effects are pretty (and yes, intentionally) cheesy throughout, but everything blends together to make this game exactly what it needs to be.

I haven’t even touched on the collectibles (including a few wild weapons), elements like York needing to take care of eating, sleeping, shaving and cleaning his clothes on a regular basis, the superb twists the game throws at you that make it surprisingly deeper than the “cheapness” it initially displays and a few other things. But that’s because this is the sort of game you NEED to sit down with along with a few other people just to see how they react to what’s going on. Some of them will think it’s crazy (and your own sanity will come into question) while others will want to see more and if they own a PS3, perhaps even grab a copy for themselves. That’s the beauty of Swery’s vision here  – it takes you for a long ride and you may not “get” it, but you’ll appreciate the drive and enjoy the truly rustic sights on that vacation to hell…