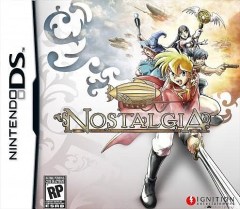 An excellent game for entry level players or seasoned JRPG veterans who can recall the “good old days” with a wistful smile, Nostalgia is one of the best games in the genre this year. The Matrix Software developed Tecmo/RED co-produced project, some ten years in the making, just feels right from the moment you start playing and it only gets better as the hours zoom by. What makes the game so outstanding are the combination of well-worn genre elements spiced up by a rewarding skills-based battle system and a huge game world absolutely packed with stuff to do and secrets to uncover. The game rarely misses a note throughout and despite a few minor flaws can easily stand up to some of today’s console JRPGs in terms of bang for the buck.

The basic story drops you into the shoes of Edward Brown, a young British lad who sets off looking for his dad, Gordon, an Indiana Jones-ish adventurer who goes missing after rescuing a mysterious girl from a bizarre cult. You’re given Gordon to play with for about two minutes or so in the game’s playable intro, but it’s Eddie’s show for the bulk of the game. Edward soon meets up with Pad, a tough orphan skilled in the use of firearms and the pair team up for the long haul after a bit of rat-hunting in the London sewers. The boys eventually meet up with Melody, a trash-talking young witch in training who joins the team to escape being scolded by her village’s elder for blowing up a pot. Shortly thereafter, the threesome re-rescues Fiona, the girl Eddie’s dad saved at the game’s beginning and the game really gets cooking.

New characters are introduced as the game progresses, some of which join your party temporarily, boosting your battle skills or adding other helpful assists. You’ll meet up with a female sky pirate looking for her lost sister and later, receive help from a certain group of adventurers you eventually team up with in order to solve a huge part of the main quest. It’s too bad that some of these guys and gals can’t become permanent parts of your traveling party in certain tough sections of the mid and endgame, as their skills are pretty formidable in those areas that they do join your cause. On the other hand, the rapic-fire nature of the game’s pacing makes each teaming quite exhilarating as you hit a new dungeon to see what your temporary partner can do while they’re tagging along.

Then game’s late 19th Century alternate Earth setting makes for a nice change up from the usual fantasy/sci-fi worlds found in many other RPGs. In addition, the lighter touch, overall pacing and more humorous dialog makes for a nice change of pace from some of the gloomier “emo” scenarios found in too many of today’s JRPGs. If you’re like me and play a lot of RPGs, the feeling of nostalgia is inescapable, yet makes the game highly enjoyable. Only a fool would read the title, look at screens and/or game footage and still call the game a “rip-off” afterward. Of course, if you’re too jaded to see the self-referential smartness on display (despite the game constantly nudging and winking at you), I really don’t know what to say other than play LESS games so you can appreciate the medium more (or something kooky yet paradoxical like that).

As in plenty of RPGs, airship travel plays a big part in Nostalgia and yes, some gamers will no doubt want to draw direct comparisons to games in the Final Fantasy series as well as Sega’s epic Skies of Arcadia on the Dreamcast (and later, GameCube). If you’ve played way too many RPGs like me, you can probably trace bits of the game to the aforementioned titles and add bits of Velldeselba, a PSOne RPG from 1997 and The Airs, another PSOne RPG from 1999, two games that featured airship combat as a main gameplay element. If you dig even deeper, you might also see in the map-based travel a very tiny dash of RED’s own Tengai Makyou: Daiyon no Mokushiroku – The Apocalypse IV, a wild Sega Saturn RPG from 1997 that had its cast traveling through different US states on a quest to put down an evil demon unleashed by the main character as a child.

Combat, whether on the ground or in the air is good old-fashioned random battles and turn-based, but offers up some interesting elements. Defeating monsters earns you the requisite gold and experience points, but you also get Skill Points which can be used to upgrade each party member’s skills. This allows players to customize their characters how they like (or not customize them at all), making any or all into total powerhouses as skills are beefed up. Some later skills require other skills to be leveled to a certain point before they become available, so curious players will want to be uncovering those “?” slots as quickly as possible. You’re graded post-battle from “S” to “C” and nailing an “S” Rank will get you more Gold, experience and Skill Points, so getting the more powerful skills is actually a benefit as the game goes on.

One thing veteran RPG players will find out quickly is that the dungeon battles can be incredibly easy right from the beginning and as their party gains levels and new skills, most land-based battles actually become less challenging. However, in the airship battles, you’ll always be tasked with new and tougher enemies as your craft travels further and eventually, higher on the world map. I look at it this way: the dungeons are grinding paradises so you can survive the airship sections. Enemies in the skies often show up in groups and you’ll find yourself outclassed by gunships that have a few times more HP than your entire party. These big cruisers can wipe out your ship in a few shots, so the better skills you take into the skies, the less frustration you’ll run into. There are also plenty of flying creatures to give you grief, a few demons and more pesky beasties that can send you down in flames, so those dungeon areas become crucial as the game goes on.

Some of the dungeons in the game are multi-tiered affairs that aren’t all that long, but require careful navigation in order to locate every treasure and reach 100% completion in your Adventurer’s Journal. That Journal keeps track of everything from monsters, items, new characters met and more, so consulting it is a must throughout the game. Oddly enough, despite the great translation job done with the rest of the dialog and story text, the word “Adventurer’s” is misspelled on the cover of the book (the game’s one major text error that should have been caught). The nice thing about the Journal is how it continually updates the character relationships and other tidbits as the story plays out. You’ll also be able to tackle quite a few optional Adventurer’s Association quests, all of which can add to your Adventurer’s ranking, gaining you prestige and some cool items that come in very handy.

The game’s presentation is mostly solid throughout and while it’s not the best-looking RPG on the DS, it gets the job done quite well. Visually, Matrix has figured out through its other DS projects that the DS can pump out PlayStation One quality graphics with no trouble. So they more or less cooked up a game that looks just like something from that system’s late 1990’s RPG library. While I’m not too find of the super-deformed 3D character models, the character portraits are lively and charming enough to make up for the blocky bunch you’ll be seeing up close and personal. Interestingly enough, the game’s bosses all get a “cuter” SD and more realistically rendered 3D model, so it’s not as if Matrix couldn’t have done the entire game in the more appealing style. Nevertheless, you’ll see plenty of in-engine cut scenes with the requisite humorous and dramatic elements, none of which are too long and all of which are enjoyable.

There’s also a superb soundtrack that makes each new area thrilling to discover. I loved the different music for each altitude you reach in the airship, the boss battle tunes and even the familiar battle end tune you’ll hear a few thousand times as you blaze through dungeon after dungeon. There’s no voice acting or anime cut scenes here, but the quality of the music is so great that it drives the action forward just as well as speaking characters would. Each of the cities you visit has its own “cultural” theme music, specific weapons and townspeople that lend a certain mood to the area. Granted, the cities aren’t as large as in other RPGs, but Matrix clearly had fun in creating the different visuals for each area. As London is your home, you’ll need to hop back there from time to time to check out special weapons that show up thanks to the trade routes you’ve opened up through your travels to new lands.

I haven’t even covered all the cool optional quests or bosses, the great ending that unlocks a playable, open-ended epilogue that allows you to continue playing for as long as you wish and the additional goodies you get from seeking out all 50 World Treasures, tricky to locate map points based on real-world ruins or other locales. There are also little furry creatures called Korols in each dungeon that can restore HP or MP, sell you items, identify Gadgets and even give you a hint or two. The types of Korol you come across is totally random, so you don’t always need to seek out each one if you’re in a tearing hurry to get through some of the tougher maps. On the other hand, you never know which type you’ll run into until you go to the trouble to do so. This is one game where exploration is part of the fun and players that crave JRPGs with more than enough to do that don’t sink into the depths of doom and gloom will really be pleased by what’s here.

As someone who’s played hundreds of JRPGs since Phantasy Star on the Sega Master System (and an equal amount of PC RPGs), I can truly say this game indeed evokes memories of camping out on the couch for a weekend plus of dungeon diving and boss-bashing. Nostalgia is carefully crafted to bring those warm fuzzy feelings to the surface and the game revels in its plot devices and scripting to keep you thinking stuff like “Ah, I remember this sort of thing happened in…(insert name of favorite 8/16/32-bit classic here).” While much of the game will seem all too familiar, Nostalgia still fits like a favorite pair of jeans glued to a really comfortable couch. If that’s your favorite cup of tea, this is one ride you’ll absolutely want to take.